This is the sort of pen that I think I would have really loved when I was twelve years old, but as it is now, I'm not terribly excited by it.  Don't be mistaken - the Marvy Le Pen is a very nice pen, but it is just not for me. 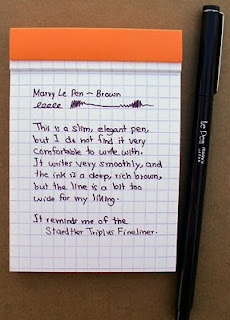 The pen writes very smoothly; it did not bleed through on any of the papers that I tried it on, although there was moderate showthrough on some of the thinner, poorer-quality papers.  The ink is a deep, rich brown, nearly black - almost too black.  I would have preferred a brown that was a bit, well, browner, but that is merely a personal preference.  The line was also a bit wider than I like, being about 0.7mm (I usually like my pens to be 0.5mm or less).  Again, your tastes may differ from mine.

The pen itself is very small and slim, which some people might not like.  I don't mind writing with small, slim pens, but there was a sharp edge right where my middle finger was gripping the pen.  Since you may hold your pens differently, you may not have this issue, but I found the Marvy Le Pen very uncomfortable to write with.

This pen reminds me a bit of the brown Staedtler Triplus Fineliner.  The Staedtler would be my preferred pen in most situations, as it has a finer line and browner brown ink, and my finger fits just below the sharp edge on the Staedtler as opposed to directly on top of it.

I haven't had many pen reviews up lately, partly because I've been holding off making any new purchases for a while (I'm waiting for the back-to-school sales in August).  I'm not going to be able to hold off much longer though, so I would like to know: Are there any pens (or other supplies) that you would like to see me review here, or any that you think I should review?

Finally, don't forget to check out the 12th Carnival of Pen, Pencil, and Paper at Goldspot Pens.  Have a good day!

Related reviews: The Pen Addict, Good Pens, Pocket Blonde, A Place for Everything, Pens 'n' Paper, The Pen-Guin.
Posted by Heather at 12:42 PM