The Sharpie Pen is one of those pens that seems to be constantly remaking itself and appearing in countless different incarnations.  The RT version has been around for a while, but (probably because retractable pens generally have never been my favourites) I haven't actually tried it out until recently.

Like the Grip version, the Sharpie Pen RT has a more contoured and comfortable barrel than the original, but has also unfortunately lost the needle-point tip that I loved in the original.  Luckily, it also does not have the strong chemical odour that I noticed in the Grip version when it was new.  There is nothing different about the way the RT writes, although, interestingly, the blue ink of the RT appears slightly darker than the blue ink of the original - unfortunately, my original blue Sharpie Pen has since passed away, so I can't do a direct comparison for you.
﻿ 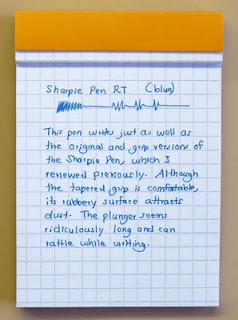 I also must apologize for the somewhat outdated nature of this review.  Sharpie has come out with a version 2 of the RT, while mine is, regrettably, version 1.  Version 2 apparently has a slimmer grip, black plunger instead of chrome, and ring around the middle of the pen showing the ink colour.

One complaint I have about all the versions of the Sharpie Pen is that the pens do not make it obvious what the ink colour is.  If you have a number of pens mixed together in your pencil case and lighting is perhaps not ideal (although I don't know why you'd be writing in dim lighting anyway), then it can be difficult to pick out the colour of Sharpie Pen that you want.  Although the RT has the stylish black barrel, the colour is only indicated by the end of the plunger and, in the new version, a narrow ring around the middle.

Also, the grip of this pen attracts dust.  A lot.  And it doesn't come off easily.  The Grip version has the same problem, but in that case the grip is covered by the cap when the pen is not in use, so the problem is not as noticeable.

Finally, does the plunger of this pen seem ridiculously long to you?  The first two people I showed this pen to both commented on the length, and thought that the pen looked a little, well, silly.  Nevertheless, I don't have any problems with it, although it can rattle a bit if you are writing particularly vigourously.