It is a fact of life that we all makes mistakes.  And sometimes these mistakes involve pens.

The Zebra Z-Grip ballpoint pen was such a mistake. 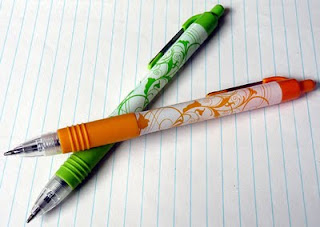 It all began innocently enough.  I was in the university bookstore, desperate to find a pen that was a) not one I had tried before and b) neither blue nor black.  I soon spied a cup of colourful Zebra Z-Grip ballpoints.  A little voice inside of me said, "You know, you usually don't like ballpoints that much."  "Well, they can't be that bad!" I blithely replied, "I'll take two."

Now, I should point out that the Zebra Z-Grip ballpoint is not a bad pen.  In fact, if all you ever used were ballpoints, you might even find it halfway decent.

For one, the appearance of the pen is perfectly acceptable.  The grip is nothing special, although I do rather like the addition of the four ridges on the upper part of the grip.  The retracting mechanism works fine, and the pen sports a metal clip that looks like it might actually be useful for clipping things.

The barrel of the pen is, lamentably, decorated with a floral pattern that clearly is targeted towards female pen-users, something that never fails to annoy me.  Speaking as a female pen-user, if a pen, notebook, or anything else is decorated with floral designs, then I am more likely to avoid it than buy it.  (Unless it's a packet of flower seeds or a book on gardening, in which case I will understand.)

However, the Zebra Z-Grip ballpoint really shows its true colours when it comes to writing performance.  The pen skips, contains many white spaces in the line, and occasionally deposits a glob of ink on the page.  It is, in fact, a depressingly average ballpoint pen. 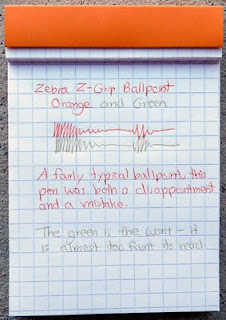 The green is the worst of the two colours I tried.  It writes with a faint, washed-out, olive-coloured ink that is nearly too faint to read.  While the orange is acceptable, even it is fairly borderline when it comes to readability.

O Zebra Z-Grip ballpoint, you have taught me never to shop for pens while in a state of desperation.  You were both a disappointment and a mistake.

Luckily, however, another fact of life is that the best way to deal with mistakes is to let them go and move on.  Zebra Z-Grip ballpoint, let's move on.