I love the idea of having only one notebook.  It would probably be a sophisticated leather-bound affair, with creamy unlined pages.  The cover would be soft and worn with use.  The notebook itself would have multiple sections - one for journalling, one for miscellaneous notes, one for keeping track of the books I read, and so on.  Accompanying the notebook would be a simple pen case, containing perhaps only a couple wooden pencils, a vintage fountain pen, a multi-pen with gel refills, and not much else.  I appreciate simplicity and minimalism, so the idea of one notebook is very attractive.  However, it is not, so far, a reality for me.

In reality, I have multiple notebooks, multiple pens and pencils, and multiple pen cases, all of them equally stuffed full, and I still find myself acquiring more, although not quite as much these days as I once did.  However, I have gradually developed something of a notebook system: a series of notebooks, each with a distinct use.  This system, although it does not quite fit my ideal of simplicity embodied in the single notebook, is still an improvement over my previous notebook "system."  This earlier "system" was not really a system at all, as it consisted merely of a random collection of notebooks, acquired haphazardly over the years, with many of them overlapping in purpose.  I wrote a bit about this "system" in my post wondering how many notebooks were too many.

Now, my current system is far from ideal either.  It still includes what I feel is simply too many notebooks, and some of the notebooks still overlap slightly in their uses.  However, I hate to retire any notebook until it is entirely filled up, so there are still a number of older notebooks hanging on in the system, even though they are no longer necessary parts of it.  As these older notebooks are gradually used up, I will be able to simplify my system further and, hopefully, take more small steps towards my ideal of one notebook (or at least fewer notebooks than I use now).

But enough said about all that.  Let's get on to the notebooks that are in my system:

These four notebooks are probably the core of the system.  From left to right, they are: 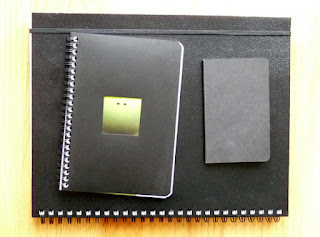 Finally, the next five notebooks are those "hangers on" that I mentioned earlier.  They're still in use, but they're not really part of the system anymore: 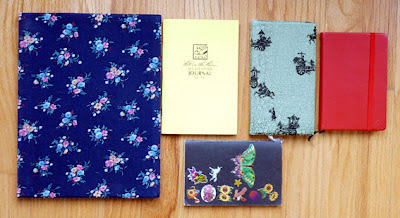 From left to right, they are:

So there you have it!  That is my notebook system!  As you can see, it is constantly evolving and is still very much a work in progress.  As old notebooks are used up, I am continually simplifying and condensing multiple notebooks into one.  I've listed twelve notebooks here; in time, these could probably be condensed down to six, or maybe even five.  That's still more than one, but I'm getting there.

What about you?  Do you use one notebook, or many notebooks?  Do you have a notebook system?  If so, how has your notebook system evolved over time?  Does anyone else get as obsessive as me about how they use their notebooks?
Posted by Heather at 12:26 PM