I don't make a secret of the fact that I love writing with micro-tip gel pens.  They are ideal for my small handwriting, and enable me to write cleanly, precisely, and neatly.  There are a number of micro-tip gel pens out there, but the Uni-ball Signo DX is one of the best.  I have previously reviewed the 0.38mm Signo DX (in lime green and green black), but this review will be of the 0.28mm version in emerald green (any guesses what my favourite colour is?) and will focus on the ways in which this pen differs from those others.

First of all, 0.28mm vs. 0.38mm: Not surprisingly, the 0.28mm Signo DX is notably scratchier than the 0.38mm.  I didn't really notice any scratchiness with the 0.38mm, but I do notice it with the 0.28mm.  This is to be expected with the finer nib, but it is important to note that the scratchiness can also be affected by factors such as the smoothness of the paper and the speed at which you write.   If you use a smooth, high-quality paper, and form your letters slowly, you'll probably notice less scratchiness.  And despite being scratchier than the 0.38mm, the 0.28mm Signo DX is still not as scratchy as many of the poorer-quality pens out there.

At 0.28mm, this Signo DX writes a line that appears comparable to that of the 0.3mm Pentel Slicci.  Maybe a microscope or hand lens could pick up a difference, but my eyes alone can't really perceive a mere 0.02mm difference. 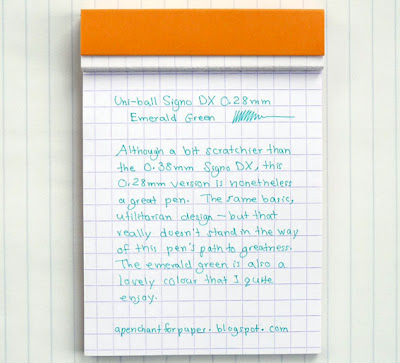 I was worried that the emerald green colour might be too pale to write with regularly, but it is not.  It is a slightly blue-tinged green, bright but still dark enough to read clearly, even in a 0.28mm nib size.  The colour is actually somewhat similar to the green ink in those old Bic 4-colour ballpoints, but not as dull.  The ink really is a lovely shade, and one that should stand out from any other colours that you may be using. 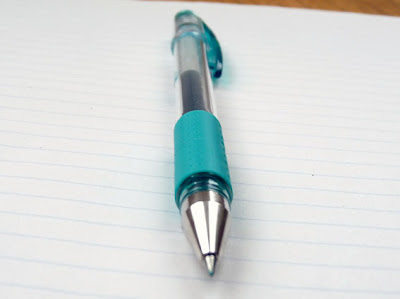 The appearance of the 0.28mm DX is very similar to that of the 0.38mm.  Basic to the point of minimalism, it sports a short grip that is practically useless for me.  However, I have often thought that the Uni-ball Signo DX, since it is such a great pen otherwise, really transcends its bland, utilitarian appearance.  In other words, this pen doesn't need to wow us with its good looks, since it already delivers such an excellent, solid writing experience. 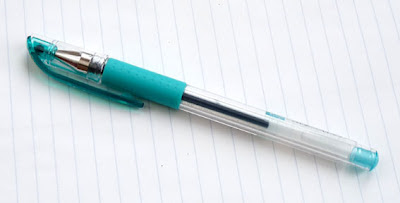 The 0.28mm Uni-ball Signo DX is not for everyone.  It is a bit scratchy, and it is very fine, which may not be suitable for everyone's writing style.  I recommend the 0.38mm over the 0.28mm, especially if you don't usually use fine-tipped pens.  But if you're a micro-tip fanatic, then don't be afraid to give the 0.28mm a try.  I do recommend the emerald green though; it is a great shade, especially if you want a slightly different green (or you're just obsessed with the colour green like I am) and it is also available in the 0.38mm and 0.5mm versions.