A Penchant for Paper will be three years old this July.  For most of this time, it has been primarily a pen blog (in fact, I even debated naming the blog "A Penchant for Pens").  Although I did originally intend to write equally about my other, related interests, such as notebooks, journals, the writing process, sketching, and collage, my focus has been mostly on pens and I have written quite a few pen reviews here over the last (nearly) three years.  And in case you always wanted to know what all those pen reviews would look like all lined up together, here they are:


This photo doesn't quite include all of my pen reviews, since I didn't start writing my reviews in my No.11 Rhodia Pad until this blog had already been around for a few months.  I'm not sure what I'll end up doing with all of these paper reviews (currently, they sit in my desk held together with a binder clip when they're not spread out all over the floor), but for now they serve as a nice record of the pens I have used in the past, many of which I'm no longer using, and will allow me to make comparisons with new pens that I may try out. 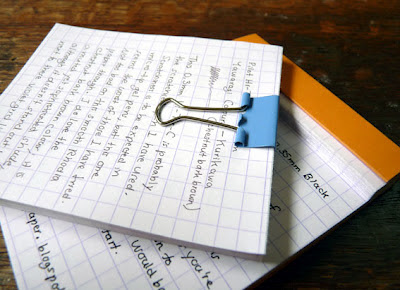 I still have at least two more new pens lined up for review and reviews of pens and other items will always be a part of what A Penchant for Paper is about, but I am looking to broaden my focus more to things that can be done with the pens and the other tools, such as writing and creating visual art.  I'm still not entirely sure what directions I'll be going in, so if you have any input to offer as to what you like about this blog and what you would like to see more or less of, I would really appreciate it.  Or maybe you're heartbroken and devastated at the prospect of fewer pen reviews in the future?  I hope not, but if so, at least now you know what (nearly) three years of pen reviews looks like!  (Because I'm sure you were all dying to know that...)  And I have several new posts coming up in the next few weeks, so stay tuned.  As always, I appreciate your support and comments!  Thank you all very much for that!
Posted by Heather at 9:16 AM