I haven't acquired any new pens in a shamefully long time, so I recently did what any self-respecting pen fanatic reviewer would do: I started looking around the house for any older pens that I hadn't reviewed before.  I found this pen, the Zebra Zeb-Roller, in my mom's pencil cup.  It's not the kind of pen she typically uses, so I think she likely found it at work and brought it home.  I also suspect that it's been around a while, and I'm not sure whether Zebra still makes this particular model or if it's still available anywhere.  I haven't been able to find one quite like this on the Internet, which disappoints me, because if Zebra does not still make this pen, they should.  The Zebra Zeb-Roller is an excellent pen with an understated, basic design.

The Zebra Zeb-Roller is a needlepoint, 0.5mm rollerball pen, rather similar to the Pilot V5 Hi-tecpoint (or the Pilot Precise V5, as it's also known).  Writing with the Zeb-Roller is, however, a more tactile and, ultimately, a more enjoyable experience.  It's hard to describe.  The pen writes very smoothly, but it makes a slight scratchy sound on the paper.  But scratchy in a good way, not in a bad way.  You know that scritchy sound that Sharpie markers make on paper when you write with them?  Well, this is kind of like that.  But different.  Like I said, I can't describe it.  (And I probably have you all utterly confused by now.)  But I like it.  It's just some magical quality about this pen that automatically makes me like it.

The black ink is, well, black.  It feathers and bleeds through a bit on "ordinary" paper, but performs nicely on higher quality papers, writing with a nice crisp dark line: 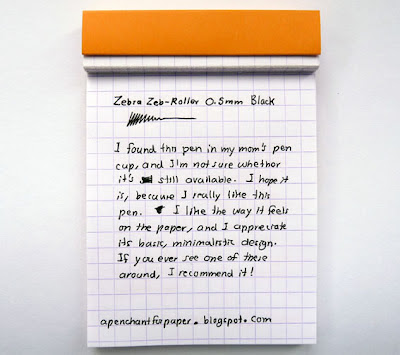 As far as appearance goes, the Zebra Zeb-Roller is as basic as they get.  Cylindrical barrel, basic lid with a functional metal clip, no grip.  Absolutely no markings on the barrel other than the name of the pen.  But again, I kind of like it.  For no particular reason.  Maybe it's the minimalism of it.  Or maybe it's just refreshing to see a pen that's just a pen.  It's not trying to be eye-catching, cute, flashy, feminine, masculine, ergonomic, stylish, sophisticated, or anything else.  It's just a pen.  And it gets the job done.

Frankly, it's even hard to write a review of this pen.  There's nothing about it that screams out at you, either good or bad.  Writing with it, the pen itself just fades into the background.  It's just your hand, on the page, writing.  I like it. 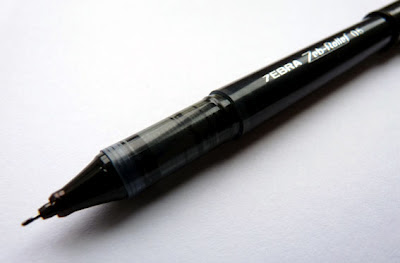 If you know anything more about the Zeb-Roller (such as whether or not you can still buy it anywhere, or when it was made), I'd appreciate you letting me know.  And on the off-chance that anyone from Zebra is reading this, it would be great to see this pen back in circulation.  Would it be able to compete with all of the other pens that are available today?  I really don't know.  Regardless, watch for any of these pens that you may stumble across in your travels.  The Zebra Zeb-Roller is solid basic rollerball pen and I do recommend it.
Posted by Heather at 7:00 AM