The first origami model I ever learned how to fold was this simple box, sometimes called a masu box.  It's a traditional origami model, and probably one of the most well-known.  It remains the only origami model that I can fold today from memory, without looking at the instructions.

In around my first or second year of university, I was really into origami.  I filled every spare surface in my tiny dorm room with dozens of folded paper models.  I stopped after a while, partly because I didn't really know just what to do with the models once I had folded them.  A box, however, is so useful.  You could use it to hold candies, paper scraps, rubber stamps, beads, buttons, or, perhaps, if you were clever, a whole series of folded paper boxes, in gradually decreasing sizes, nested within each other.

A few tips if you want to try your hand at folding this box: Use your fingernail to crease the folds and make them sharp and crisp.  If the inside flaps won't stay down, use a tiny spot of glue to hold them down.  This is technically cheating, but I won't tell anyone.  You don't need to use origami paper; any paper will do, as long as it is thin and cut to the shape of a square (most models start with a square piece of paper).

I recently found myself thinking of origami again so I thought I would fold a few boxes to see if I could still do it, and I could!  And I also had something in mind that I wanted to use them for.

I used them to organize my button collection: 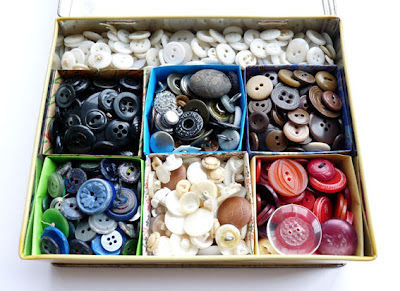 Because everyone needs to have an organized button collection, right?  I folded 2 more boxes than were shown in the first photo, and, by a lucky coincidence, 3 boxes just fit exactly across the length of the button tin.  Seriously, I didn't measure or plan that out at all.  I organized the buttons by colour and type, and filled the empty space at the back of the tin with the plain white buttons.

Have you ever done origami?  If so, what did you make?  What did you do with your models afterwards?  Did you make something useful or was it just for fun?
Posted by Heather at 9:04 AM