The Pentel Pulaman is an odd pen.  It confuses me.  It is marketed as a fountain pen, but instead of a normal nib, it has this crazy plastic nib that looks nothing like any fountain pen nib that I've ever seen.  If you had put this pen in my hand without telling me anything about it, I probably wouldn't have even guessed that it was a fountain pen.  The actual feel of it when writing is more like that of a felt-tip pen.  And it reminds me more than anything else of the Zebra Zeb-Roller I reviewed a few months ago - similar understated, minimalist design, similar scratchy feel to the nib - except the Zeb-Roller is a needlepoint rollerball pen and the Pulaman is a quasi- fountain pen /  felt tip pen thing.  Or something like that.


Confusion aside, I actually rather like how the Pulaman writes.  It has a rather obvious scratchy sound and feel to it, which I like for some odd reason but which may not appeal to everyone (and which means that this is probably not the best pen to bring to, say, an exam, where everyone in the room will be able to hear your pen).  The ink itself flows very smoothly, with no skipping.  Unlike normal fountain pen nibs, the plastic nib doesn't seem to be as fussy about which angle you hold it at, although certain angles cause a relatively minor amount of ink splatter on the page.  It is not really very noticeable, and the more practice I get with writing with this pen, the less it seems to occur.  One thing I definitely love about the Pulaman: it's finer-tipped than most of the other disposable "fountain pens" that I have used, and certainly much more so than the Pilot Varsity I reviewed last month.  I'd say it feels comparable to a 0.5mm felt tip pen or rollerball, which is just about ideal and a definite plus for me. 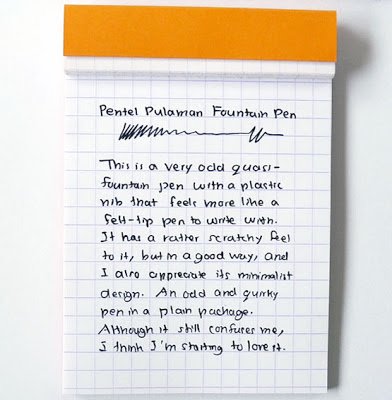 Apart from the crazy nib, there isn't much to say about this pen.  The Pulaman is, as I mentioned before, very minimal and basic in appearance.  Although it may not win any points for good looks, there is something about this extreme minimalism in a pen that appeals to me.  The pen body itself is a dark brown, while ink colour is indicated by a plastic section on the end of the clip and by the plastic on the top and bottom of the nib.  There is no branding on the pen other than on the metal clip (a nice sturdy clip by the way, albeit a bit stiff).  One thing I don't like: the nib itself is white plastic, which seems out of place on an otherwise dark-bodied pen and is stained with ink, giving it a rather messy look that vaguely annoys me.  A better idea (in my opinion) would have been to have the entire nib coordinated to the ink colour. 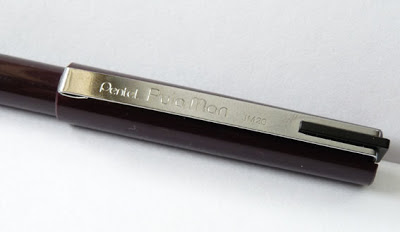 When I first started using the Pentel Pulaman, I had mixed feelings about it.  But it's starting to grow on me.  The more I use it, the more I love it.  It's an odd and quirky pen in a plain package.  It's the kind of pen that you'll probably either love or hate.  It's the kind of pen that will have people asking you, "What kind of pen is that?"  And then, of course, you can give them this complex answer involving nibs and feeds and inks and the alignment of the planets and who knows what else that will confuse them utterly and make them sorry they ever asked.  It's probably not for everyone.  I wouldn't describe this as a beginner's fountain pen, because it really wouldn't prepare you for the experience of writing with a "real" fountain pen.  Writing with the Pentel Pulaman is an experience in and of itself.  Check it out.  It may surprise you.  And maybe even you, like me, will find yourself falling in love with it despite yourself.