The Uni Mitsubishi Pure Color-F Double-Sided Sign Pen (wow, that's a mouthful!) wasn't a pen I had even heard of before The Pen Addict wrote a review of it earlier this year.  Brad's review was so positive and the pen itself looked so great, I knew I would have to try this pen out for myself.

The Pure Color-F is a double-sided porous-point pen.  The double-sided part is a bonus, because it's kind of like getting two pens for the price of one!  One tip is a medium 0.8mm and the other is an extra-fine 0.4mm.  The porous point is apparently extra sturdy to resist breakage and deterioration - something that can be a problem with these kinds of pens - but I have not yet used this pen long enough to really comment on that. 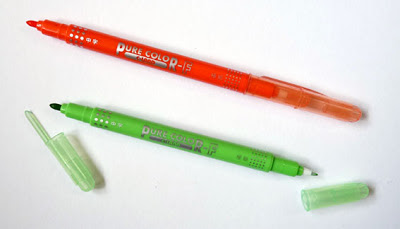 What I do know is that I love the way this pen looks.  The barrel is long, narrow, and boldly coloured to match the ink colour.  The name of the pen and the barcode are printed in silver, which make them more unobtrusive than they might otherwise be.  It has no grip, but I really love its minimalist look and bright colour.  The caps are translucent and both post on the ends.  Only the cap on the 0.8mm end has a clip.  The two caps look like they should be interchangeable, but they are not.  I think it would be nice if they were (I'd like to switch them around to put the clip cap on the 0.4mm end), but that's a minor quibble.


Both the 0.4mm and 0.8mm tips write very well.  I would describe the 0.8mm tip as more of a marker rather than a pen, simply because it lays down such a wide line (I actually think 0.8mm might be a bit of an understatement).  The 0.4mm tip is not at all scratchy, and writes very smoothly with a crisp fine line.  Both tips feel very firm, and not mushy.  I doubt that I will use the 0.8mm tip much for writing, as it is simply too wide for me, but I may be able to use it for doodling or colouring.  The 0.4mm tip, however, is just about perfect.


I chose this pen in orange and yellow-green, and the orange is definitely my favourite of the two colours.  It's a bright, relatively dark shade of orange that is easy to read, even using the 0.4mm tip.  The yellow-green, however, is a bit of a disappointment, as it is simply too light for me.  It's fine when I use the 0.8mm tip, because then the pen is laying down enough ink to make it easy to read, but with the 0.4mm tip, it's simply too light and too fine to read easily.  That said, I'm not too upset about this - I knew I was taking a chance with the yellow-green, and I'm still happy with the performance of these pens.  (And the orange is awesome enough to make up for my disappointment with the other colour.)


Overall, I love the Uni Mitsubishi Pure Color-F Double-Sided Sign Pen (but I do not love its long name!).  Although there are a lot of porous point pens out there, this one really stands out because it has an eye-catching design, comes in a multitude of colours, and is double-sided.  It's both fun and functional, and I wouldn't hesitate to recommend it.  It's also very inexpensive, so there is no reason why you shouldn't give this one a try.  Many thanks to Brad Dowdy for bringing this pen to my attention!

Related review: The Pen Addict
Posted by Heather at 2:09 PM