Some pens write consistently well, from the time you first uncap them to the time you use up the last bit of ink inside them.  Other pens, however, are disappointments.  They may start out writing well, but over time, things change.  I try to use my pens for a fair amount of time before reviewing them, but I have still encountered a few pens that ended up as disappointments after my initial positive reviews.  Here's a list of my top five disappointing pens: 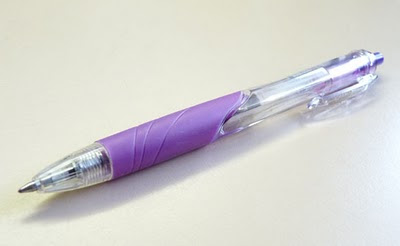 1. Zebra Surari 0.7mm Violet
In my review, I described this super-smooth ballpoint (which is similar to the popular Uni-ball Jetstream) as "an excellent choice".  I had some misgivings about the pale ink colour, but the pen was still usable and I spoke glowingly of how smooth it wrote.  But, in the months after that review, the ink colour actually become even paler.  I don't know how this is possible, but when I compare the ink colour now to my original writing sample, it looks like it's written with a different pen.  The ink is now simply too faint for me to use.  (I don't think it's because the pen was sitting around unused for a long time.  When the problem first developed, I was using this pen regularly.  The ink colour just gradually became lighter as I used up the ink.)  I'm very disappointed with this pen.  I would never recommend it, and, while the darker colours may be safer choices than this one, I don't really have any interest in trying out any other versions of this pen.

2. Zebra Sarasa 0.4mm Olive
When I reviewed this pen, I commented on its scratchiness.  That alone made it a pen I wouldn't recommend, but I could live with it and I still liked the ink colour.  Then, some time after writing that review, I was peacefully writing when the pen started becoming even more scratchy and then the small metal ball in the tip of the pen popped right out.  Obviously, the pen was completely unusable after that and I had to throw it out.  It was a disappointment because the 0.7mm Sarasa is one of my favourite pens, and I have never had anything like that happen to any other pen I have used before or since.  The only good part of this story is that I bought the pen in a close-out sale at JetPens, and JetPens no longer carries the standard Sarasas in this fine of a tip size.  And that is probably a good thing.

3. PaperMate Biodegradable Ballpoint
This pen's problem is similar to that of the Zebra Surari, but it's not as disappointing since I was never that crazy about this pen in the first place.  In my review, I wrote, "I need to exert considerable pressure while writing to make a mark on the page and, even then, I don't feel as though the ink is dark enough."  Still, the pen was usable.  I tried to use this pen again a while back and the ink colour had become so faint and I felt like I had to press so hard on the page while writing that, once again, the pen had become unusable.  It had changed from simply not great to absolutely atrocious.  Unlike the other pens on this list, however, this pen may be able to be saved.  I have a few spare ballpoint refills around that might fit in this pen, and since I do still like the pen body, this story should have a happy ending.

4. Stabilo Colorgel 0.4mm
I'm cheating slightly to include this pen on the list, because it actually disappointed me before I wrote the review, not after.  It wrote smoothly when I first bought it, in a nice dark shade of green, and the pen came in a rather fun-looking design.  Then it became more inconsistent and scratchy, the cap oddly became too loose to fit, and the pen finally stopped writing altogether.  Was it because the ill-fitting cap allowed the pen to dry out, or was it doomed from the start?  Who knows?  Another disappointment.

5. Sakura Gelly Rolls White and Black
I feel a bit reluctant to put these pens on this list, but when I compare them to the other Gelly Rolls pens that I have used and loved (the Stardust, Moonlight, and Gold and Silver Shadow Gelly Rolls), these ones have been a disappointment.  The problem?  The pens (especially the black, the white is still acceptable) no longer write smoothly at all, and it is impossible to get a smooth consistent line from the black without skipping.  I suspect that the fault may be partly mine for letting the pens sit too long unused, BUT I have done the same thing with the other Gelly Rolls I own and they still write perfectly.  So these ones seem to not be of the same quality as the others and they are a disappointment.  I still recommend Gelly Rolls, but not the standard versions.  (And if you're looking for a good white pen, try the Uni-ball Signo Broad, which is WAY better than the white Gelly Roll.)

So that's my list of disappointing pens!  While some of these may have been uncharacteristically bad experiences with otherwise decent pens, I wouldn't recommend any of these pens, and I doubt that I'll ever be interested enough to try any of them again, even if someone tells me that most examples of the pen are perfectly fine.  I'd rather stick with the pens that have never disappointed me.

What pens have disappointed you?

(For more disappointments, check out my list of Worst Five Pens from three years ago.)
Posted by Heather at 10:41 AM