I'm fairly sure that I have liked none of the PaperMate ballpoints that I have tried. Not that I've tried a lot, of course, because the few disappointing examples I have tried haven't exactly encouraged me to try more.  I don't understand it, because PaperMate does make a perfectly decent gel pen.  So why can't they make their ballpoints better?  But let's get back to our subject - the PaperMate Write Bros. ballpoint pens and mechanical pencils. 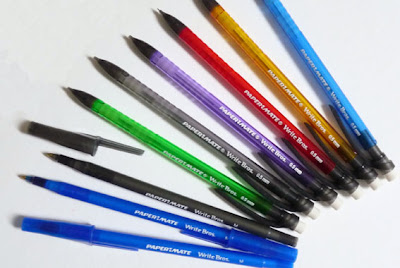 The PaperMate Write Bros. ballpoint pen looks like a cheap stick ballpoint.  Which is of course just what it is - a narrow plastic cylinder with no grip and a flimsy-looking clip.  The kind of pen you can buy a dozen of for a couple bucks.  Writing quality is fairly terrible.  The ink appears pale and washed out, and these pens (along with most other PaperMate ballpoints I have used, with the possible exception of the InkJoy, although that one had other problems) have the bad habit of simply ceasing to write when left attended for too long.  Until they reach that point, the ink seems to gradually dry up and become more and more difficult to write with, requiring you to put more and more pressure on the pen to make a mark on the page, and - because these pens are just narrow plastic cylinders with no grip - that in turn causes more and more pain to your hand, as you grip the pen tighter and tighter. 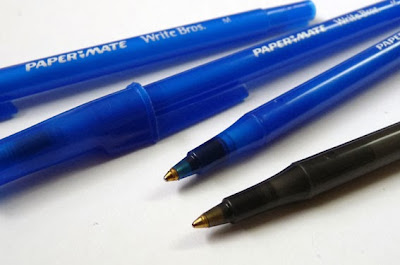 For whatever reason, the single black pen I have writes much more smoothly and with a darker ink than the three blue pens I have, although given my small sample size, I'm not going to draw any conclusions about whether or not there actually is any difference between the blue and black inks. 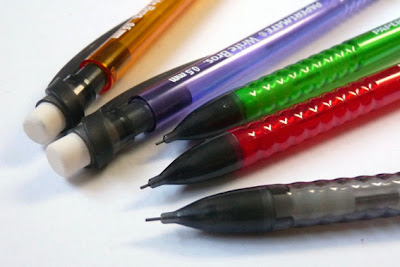 Let's move on to the mechanical pencils.  These are actually usable.  I'm not very fussy about my mechanical pencils, and as long as the pencil holds lead and I can refill it with my favourite Pentel Hi-Polymer refill leads, then it will generally be acceptable.  And the PaperMate Write Bros. mechanical pencils do fulfil that basic requirement, more or less.  They also come in a lot of different colours, they're available in 0.5mm, and I like the pop of the white eraser against the translucent black clip and how the eraser matches the bold white lettering.  Apart from that, these pencils are very lightweight and the plastic feels rather cheap and flimsy.  The eraser also erases poorly.  But I could see these being a decent choice for a parent who needs to buy their kid some mechanical pencils and knows that their kid will probably lose all the pencils by the end of the school year, so quality and durability of the pencils is not as important as something cheap that can be bought in bulk. 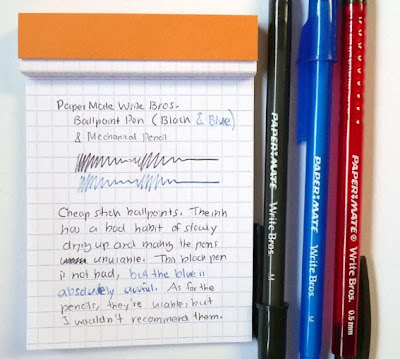 Overall, the PaperMate Write Bros. ballpoint pens and mechanical pencils are cheap, basic supplies.  The mechanical pencils are usable, but I would certainly not recommend them in most situations.  The ballpoint pens, however, are among the worst pens I have ever used, and I would advise you to avoid them unless you want to give them to someone you don't like or to use them as bait for pen thieves (though I would hope that any self-respecting pen thief would know that these aren't worth stealing!).

Related reviews (mechanical pencil): Dave's Mechanical Pencils (make sure to check out the photo of what happened to the eraser!).
Posted by Heather at 6:00 AM