A couple of months ago my mom brought me three Sheaffer fountain pens from the thrift store.  They were in a plastic Ziploc bag and on the outside of the bag was a Post-it note labelled "Calligraphy pens."  The three pens were basically identical to each other except that two had dark red bodies while the third was blue, and they all had different nibs: while all had italic nibs, one was fine, one medium, and one broad.  And all of the pens were filthy. 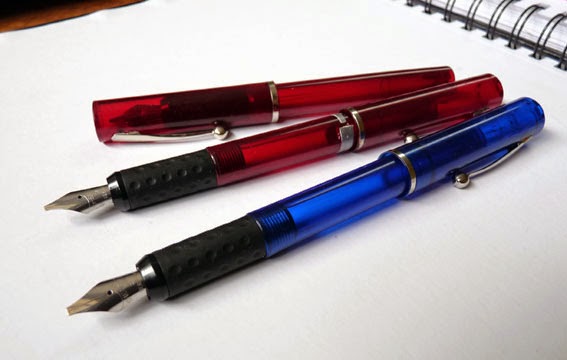 All three pens had dried-up, partially filled ink cartridges inside them.  One pen, bizarrely, had ink (of a different colour) inside the barrel of the pen itself.  I have no idea how that could have happened.  If the ink had been of the same colour as the ink in the cartridge, it might have made more sense, but it was obviously a different ink.  The ink was all over the grip of the pen (as I unfortunately found out the hard way) and I couldn't even unscrew the barrel since it was stuck shut with dried up ink.

Previous experiences with cleaning pens have taught me that simple, plain water can be quite effective, so I filled a bucket with room temperature water (it may be tempting to use hot water, but many readers have warned me against that in the past), took the pens apart as best I could, and dumped them in.  It was fascinating watching the pens soak (I know, I really need to get out more...), as red, orange, blue, and black inks (yes, four ink colours out of three pens, because of the ink-in-the-barrel issue mentioned above) oozed out of the nibs, the empty cartridges (yes, I cleaned the old cartridges; for some reason I can never bear to throw these away), the barrels, and even the caps.  When the water became too inky, I dumped it and started the process over again.  Eventually, the ink in the stuck-shut pen softened up enough to let me unscrew it.  And finally the ink stopped oozing and the water stayed clear.  I pulled everything out, let it dry, and put the pens back together.  Ta-da!  Three calligraphy pens! 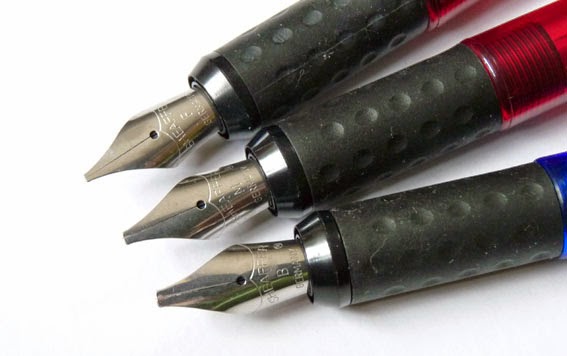 The pens are still not quite pristine, and probably never will be (one has a bit of rust on the clip, while another has a random piece of silvery tape on the barrel - you can see this in the top and bottom photos).  I haven't used any of these pens yet, but I have hopes that they will now be usable.  At least they are mostly clean now, and don't cover my hands with black ink when I take the caps off.

Do any of you know of a converter that will fit these pens?  I own several old Sheaffer ink cartridges, but a converter would be much more convenient.  I have seen a Sheaffer converter available, but it seems a bit pricey and I don't even know for sure if it would fit these particular pens.  Would a different converter work instead?  I don't know what model these pens are; they are marked "Sheaffer" on the clips but that is all.  (My other option would be to refill the old cartridges with a syringe, so I may try that as well.) 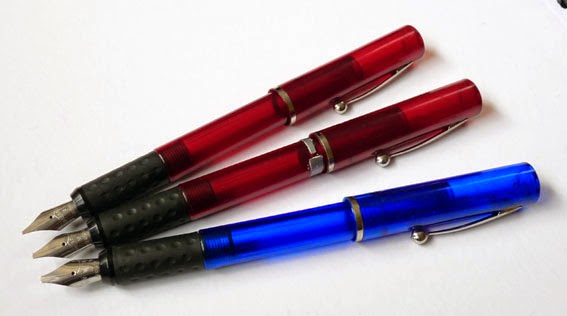 I'm also wondering: How do you practice calligraphy?  I dabbled a bit in calligraphy a few years ago and I'd like to do more of it, but my trouble is making a habit out of it and keeping it interesting.  Part of learning calligraphy is practicing the same letters and shapes over and over again, which is not that exciting.  If you have spend some time learning calligraphy, how have you made it part of your regular routine in an interesting and fun way?  Also, what resources (online, books, etc.) have you found most helpful?  I would really appreciate any answers or ideas you might have for these questions!  Let me know in the comments or send me an email.

I've been thinking about getting into calligraphy again for a while now, and I feel that acquiring these pens is a sign that now is the time to start doing just that!
Posted by Heather at 6:30 AM