The PaperMate InkJoy is probably the last pen anyone would have expected me to review again.  After all, I wasn't exactly enthusiastic about the last version I reviewed.  But I can never resist bright, fun colours, and my writing experience with this version of the InkJoy was a bit different, so I thought it would be worth another quick review.

This is the PaperMate InkJoy 100, the "lower end" version of the InkJoy, as compared to the "higher end" 700 RT that I reviewed previously (obviously, these are all "low end" pens!).  Unlike the 700 RT, the 100 is not trying to look like a better pen than it really is.  It's a very basic stick ballpoint with no grip and a simple cap - just what I would expect from a pen of this sort.  The triangular shape is a bit different, although it may not appeal to everyone, and I like that the pens themselves are as colourful as their inks - no guessing about which colour is which if you're searching through a crowded pen case. 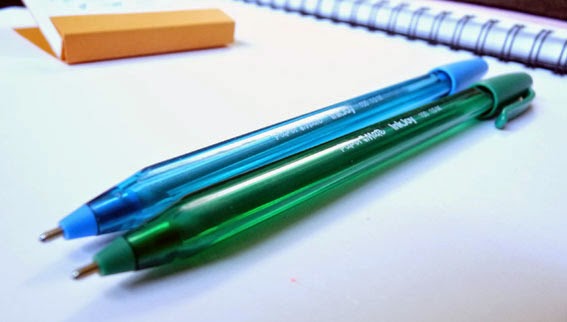 In my last InkJoy review, I was disappointed by how the pen deposited globs of ink on my page while I was writing with it.  These globs often ended up smeared over my paper and my hand.  I was expecting the same thing with these InkJoy 100 pens, but these two coloured inks (green and turquoise) are not producing ink globs nearly as often as the black 700 RT did.  Is it the 100 version in general, or just these colours?  Or just me?  However, these pens still do not write particularly well.  They are slow to start writing, and they leave a lot of white space in the line.

I do like how the InkJoy 100 comes in lots of colours.  I've only tried the green and turquoise, but I'm pleased with them.  Many coloured ballpoints that I have used in the past have ink that is either dull or too faint to read, but these colours are bright and dark enough to read easily (my photo ended up being a bit washed out, I'm afraid).


Overall, the PaperMate InkJoy is still not a pen I would recommend.  There are better ballpoints out there.  Even the basic Bic is going to offer a writing experience that is just as good, if not better, than what you'll get with the InkJoy.  I am, however, feeling more positive about the 100 than I did about the 700 RT.  If you must buy an InkJoy, get the cheap one that comes in lots of fun colours.

Other reviews: Gourmet Pens, Design Fetishism.
Posted by Heather at 6:00 AM