The end of November, and 2014 is drawing to a close... Soon it will be time to start doing all of those end of the year things, like figuring out what kind of planner (if any) I'll be using in the new year, planning next year's reviews, and so on.  You know, all that important stuff.  Here are some links to read along the way:

Posted by Heather at 6:30 AM No comments: Links to this post

Black pens are not all created equal.  While I consider black to be one of the least interesting ink colours out there, it is also (along with blue) one of the most commonly used options.  So here is a comparison of the black pens I have in rotation, as a follow-up to my green pen, blue pen, and red and orange pen comparisons. 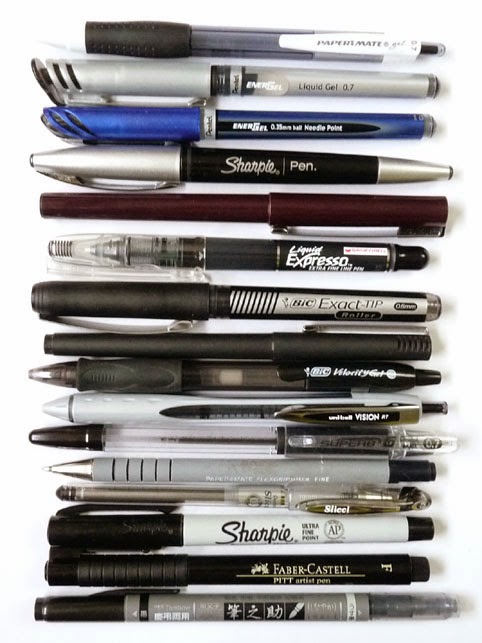 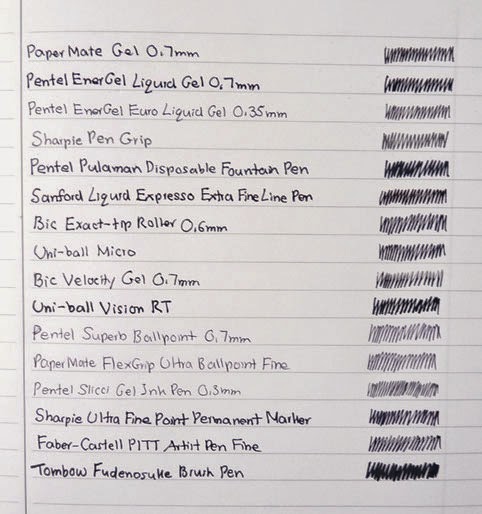 Personally, I like my black pens to write with the deepest, darkest black imaginable.  I don't particularly care for black ink (there are so many more fun colours out there), so if I'm going to use it, I want it to be not just black, but BLACK.  My favourite pen in this category is by far the 0.7mm Pentel EnerGel.  Not only does it have rich, deep black ink, it's also very smooth and lays down a luscious and bold line.  The 0.35mm version of the EnerGel has the same ink, but is not as bold as its wider-nibbed cousin.

The Pentel Pulaman disposable fountain pen and Sanford Liquid Expresso also write with a deep, dark black, as does the Uni-ball Vison RT, although since I've had some issues with how the Vision RT writes (occasional skipping), I wouldn't describe it as one of my favourite black pens.  Fine-tipped pens tend not to stand out in this comparison, but the 0.3mm Pentel Slicci actually has quite nice black ink as well.  And for drawing and sketching, the Faber-Castell PITT Artist Pen and Tombow Fudenosuke brush pen are also excellent.

My least favourite black pen is the Sharpie Pen Grip; I would describe its ink colour as more of a dark grey than a true black.  Ballpoints typically have greyish, washed-out black inks as well; the two in the comparison, the Pentel Superb and PaperMate FlexGrip Ultra (a generic cheap stick ballpoint) are no exception, and I usually like blue ballpoints better than black ones.

Finally, one pen I left out of this comparison was the Zebra Sarasa.  This has long been one of my favourite 0.7mm gel pens, but a reader recently informed me that Zebra has changed their ink formula in the Sarasa, and I have not yet tried one of the new versions.

What are your favourite black pens and inks?
Posted by Heather at 1:25 PM 2 comments: Links to this post

Much to the chagrin of some of my readers, I have been using ballpoints quite a bit lately.  They may not offer the most amazing writing experience in the world, but basic Bic ballpoints do play an important role in my arsenal of writing supplies.  Because of that, I was interested in trying out the Bic Atlantis, Bic's version of the "super-smooth" ballpoint. 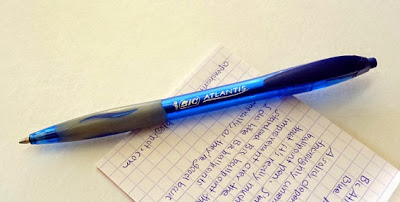 At first glance, the Atlantis appears to be a slightly flashier pen than the standard Bics - it's retractable, it has a basic grip, and the name and logo are emblazoned in silver.  It's still a very basic pen, but the design is relatively pleasing and unobtrusive, so I don't have any complaints.  The main thing that stood out to me was the grip; when I first started writing it felt almost slippery, making me feeling as though I had to grip the pen more tightly, but that might have just been me, and I didn't notice it as I continued to write.


The most important question here is: Does the Atlantis write noticeably better than the standard Bic ballpoints (e.g., the Bic Cristal)?  Well, the ink doesn't glob, which is great, but standard Bics don't glob very much either.  And it is relatively smooth writing, but it's not the smoothest ballpoint I've ever used (the Uni-ball Jetstream is probably the best pen that I've tried in this category).  I even find the standard Bics to be relatively smooth ballpoints.  And the blue ink seems to me to be a bit pale. 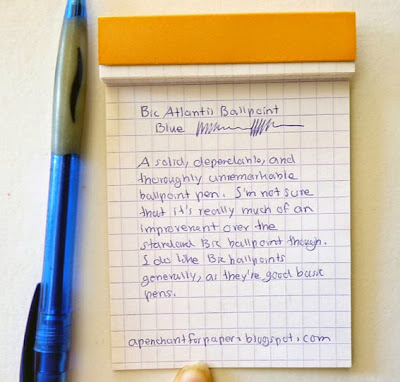 Overall, the Bic Atlantis strikes me a solid, dependable, unremarkable ballpoint, but I can't really discern much of a difference between it and the standard Bic ballpoints - which I also consider to be solid, dependable ballpoints.  Everyone is all about fountain pens these days, but I'm not ashamed to admit that I still like ballpoints (as well as fountain pens).  If you just need a basic pen to toss into your bag, keep at hand for random notes and doodles, or lure potential pen thieves away from your more important pens, than I think that you can't go wrong with a Bic ballpoint - of any kind.