As I've become more interested in wooden pencils, I've also become more interested in all of the accessories that go with them, such as sharpeners and erasers.  I'll be writing my first pencil sharpener review later, but for now I'll be reviewing another eraser, the PaperMate SpeedErase Exam Standard.  I have a soft spot for any pencil or eraser that has a school connection, and this eraser's name and the graphics on the paper sleeve make it clear that this eraser is meant to be used on Scantron sheets.  (I always loved filling in those little circles...)  Also, this eraser is black, which obviously makes it much more cool than a white eraser, right? 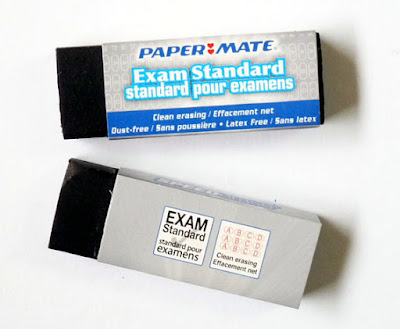 The Exam Standard is likely meant to be used with HB pencils, so I pulled out several examples of those to test it with - a Dixon Ticonderoga, Staedtler Norica, and PaperMate Earth Write (all pencils that I actually found at a local school, and hence would be likely to be used with this eraser in an exam), as well as a Tombow MONO drawing pencil.  I also compared the Exam Standard with one of my favourite erasers, the Pentel Hi-Polymer. 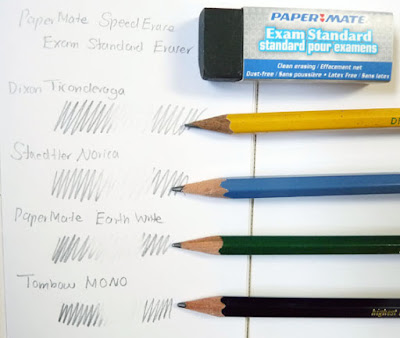 The PaperMate Exam Standard erased the Ticonderoga, Norica, and Earth Write reasonably well.  There was some shadow left behind, but likely it would be acceptable if all you were erasing was a tiny bubble on a Scantron sheet.  It erased the Tombow MONO drawing pencil the best - which I thought was ironic since that pencil is the least likely to be used in a school setting.  Compared with the Pentel Hi-Polymer, the Hi-Polymer clearly performed better than the Exam Standard (it was clear in real life anyway, and not so much in my photos!).

I was most impressed by how the Exam Standard neatly rolled up its eraser dust into one long piece.  I've never owned an eraser that did that before, so I was ridiculously excited by this.  When I remember my days of writing physics and math exams and brushing what felt like heaps of eraser dust off my desk, this is a feature I would definitely have appreciated. 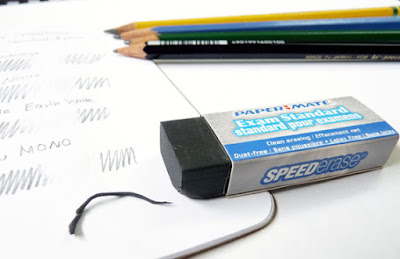 Overall, the PaperMate SpeedErase Exam Standard is not the best eraser out there.  If you're simply looking for an eraser that erases cleanly, I'd suggest the Pentel Hi-Polymer or the Staedtler Mars Plastic.  But the Exam Standard does have the advantage of being dust-free and black rather than a boring old white that soon turns grubby.  And I just find it fun to use, which must count for something, right?
Posted by Heather at 6:00 AM