How could I resist a pen with the colour lavender black?  Just as blue black manages to be entirely unlike either blue or black, lavender black is different yet again, but in a subtle way that does not call too much attention to itself, making this pen suitable for use in nearly any situation.  I would describe the colour as a very deep purple, with more blue than red in it.  Probably the colour could have been just as easily called purple black, but lavender black does sound much more interesting. 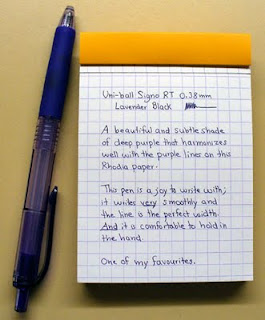 As for the pen itself, it writes very smoothly, with a beautifully fine line.  It is very satisfying to write with and is one of my current favourite pens.  The grip section is comfortable and (unlike many other pens that I have used) actually manages to cover all parts of my hand that touch the pen.  The overall appearance of the Uni-ball Signo RT is not particularly exciting but I have no complaints about it either.

Because this pen is designated "RT," it is of course retractable, which may be a plus or minus for you.  I personally prefer lidded pens, merely because of the satisfaction I get from removing the lid of a pen and snapping it onto the end, but that is definitely not a major issue here.

In other news, check out this great giveaway at Notebook Stories for a chance to win a Moleskine Color-a-Month 2010 planner and other Moleskine products.