This is another pen that I bought partly because of its colour.  How many other pens have you seen that come in purplish red? 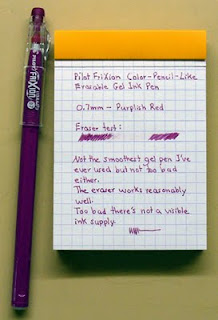 However, this pen is probably one that would go into the "good but not great" category.  It writes fairly smoothly but I have used smoother pens.  The eraser also works well, but not perfectly.  Personally, if I'm writing something that I think I might have to erase, I use a pencil.

The pen does not have a visible ink supply, which I would have preferred.  There is no clip on the lid; instead there is a small bump that I presume is to prevent the pen from rolling off the table.  As someone who likes to clip my pen to my papers, I find this a bit annoying and I am a bit puzzled as to why someone would have decided not to include a clip.  I really like how the cap satisfyingly snaps into place on both ends.  The eraser is placed on the end of the cap, meaning that it is still usable when the cap is on the end of the pen.  Apparently, the shape of this pen is supposed to mimic that of a wooden pencil, but I don't think I would have noticed that if I hadn't had it pointed out to me.  Finally, even though I haven't had this pen that long, the words "Pilot FriXion" are beginning to wear off of the cap.

If you would like a pen that just a bit different, or if you would like an erasable pen that works better than those horrible erasable ballpoints, then the Pilot FriXion Color-Pencil-Like* erasable gel ink pen could be for you.  If not, you might prefer a different pen.

*Every time I type the words "Color-Pencil-Like," I cringe at having to write "color" instead of "colour."
Posted by Heather at 4:32 PM