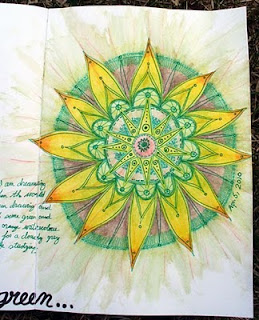 I suppose I have Stephanie from Spiritual Evolution of the Bean to thank for my newfound love of drawing mandalas.  Well, maybe it's not that new.  I have loved mandalas for some time; I used to print out mandalas that I found on the Internet and colour them with pencil crayons.  Sometimes I would even draw my own mandalas, which was always a painstaking process, involving compasses, protractors, rulers, and careful colouring within the lines.  I suppose it wasn't really that interesting, because I eventually gave it up.

Now, thanks to the inspiration of Stephanie and others, I am drawing mandalas again, and this time I'm drawing them freehand and without being so careful about colouring within the lines.  It is a wonderfully relaxing activity, a form of meditation for people who aren't comfortable without a pen in their hands.  And (trust me) you do not need to have any former art experience whatsoever.  You could even draw mandalas with a basic ballpoint pen if that was all you had.

This mandala was drawn with a green Sharpie Pen and coloured with Lyra Rembrandt-Aquarell watercolour pencils.  The darker green details were added afterwards with a green Staedtler Triplus Fineliner (because unlike the Sharpie Pen, it is watersoluble).  It is one of my favourite mandalas that I have drawn so far, probably because it uses my favourite colours of green, yellow, orange, and brown.

Here is the page spread in its entirety in the other journal: 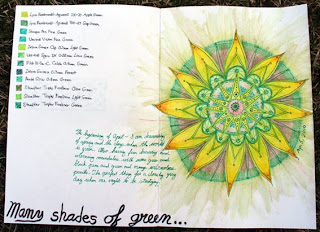 Email ThisBlogThis!Share to TwitterShare to FacebookShare to Pinterest
Tags: mandala