During the last month or so, I have occupied myself on our evening walks by picking up pencils that I find, usually in one of the three schoolyards that we regularly walk through.  The yard of the local middle school offers the best selection of pencils; I only rarely find pencils in the yards of the high school or elementary school.  I did not find any pens, only pencils.  Here they are: 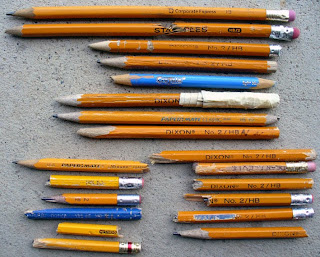 Altogether, I collected 20 pencils (or pencil fragments).  The majority of the pencils have suffered greatly in their lives: they have been broken, bitten, run over by cars, and lost their erasers.  The most common type of pencil that I found was the Dixon No.2/HB; these pencils seem to be cheap and readily available around here, as I saw a package of them at the local dollar store.  I found one pencil crayon: a light blue one from Crayola.  I love looking at these pencils and wondering about their histories.  I also wonder: how come so many children lose and break their pencils?

Some of the stubs I will sharpen and give to my mother to take to the place where she works; they often need short pencils there.  The better ones I will keep for myself (and perhaps even use them!).

Speaking of pencils, so far we have had a definite pen bias here at A Penchant for Paper.  Part of the reason is that I don't really use pencils that much, and I am rather overwhelmed by all the different pencils available.  I would really appreciate it if you could leave some pencil recommendations for me.  The pencils need to be inexpensive and readily available in places like Staples, Office Depot, and Michaels.  (I live in a small town and there are few good specialty stationery or art stores nearby, and I cannot afford to buy many things online because of the shipping costs.)  The pencils can be writing pencils, drawing pencils, or even mechanical pencils (although I'm mainly thinking of non-mechanical ones here).  You can even recommend pencil leads, erasers, or other pencil accessories.

Hopefully, I will be able to find some of your recommendations at local stores and you will see some pencil and pencil-related reviews here in the future!
Posted by Heather at 12:18 PM 15 comments:

How Many Notebooks Are Too Many?

The true notebook addict would probably say that it would be impossible to have too many notebooks, but I am not so sure.  I have been feeling overwhelmed lately by the number of notebooks that I am currently using, as well as feeling the need to simplify and use fewer notebooks.  Here are all of the notebooks that I am using right now: 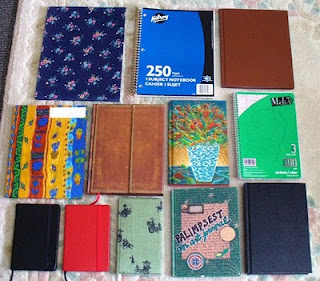 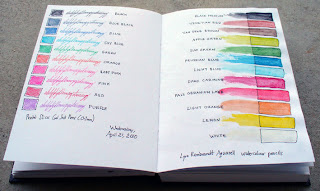 Sometimes I don't feel like drawing or sketching or making complex journal pages.  Sometimes, when I am feeling tired or stressed or just don't have a lot of time to work in my journal, all I really feel like doing is colouring in little boxes.

So I draw little boxes and take out a set of pens or markers or pencils that come in all different colours and then I colour in the boxes and end up with colour charts.  It is very soothing and relaxing.  If I am feeling especially ambitious, I might even label the colours.

These colour charts are for my Pentel Slicci 0.3mm gel ink pens and my Lyra Rembrandt Aquarell watercolour pencils.  I like looking at these pages - they look calm and peaceful and orderly, just what I need on a busy, stressful day.

In other news, you have probably noticed that I have a new design for my blog.  If you have any issues with font size, colour, background, etc. that make it difficult for you to read or navigate the blog, please let me know by leaving a comment.  I am also considering having some sort of header image for the blog - what would you like to see there?  Pictures of pens and notebooks?  Hand-drawn letters?  Mandalas or sketches?  Please let me know.
Posted by Heather at 1:23 PM 6 comments:

Although not a fountain pen, the Pentel Energel is likely to become one of my new favourite pens, with its "liquid gel ink" providing a near perfect balance between the qualities of a liquid ink pen and those of a gel pen. 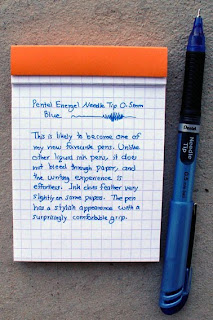 Unlike other liquid ink pens that I have reviewed here in the past, such as the Pilot Hi-Tecpoint and the Uni-ball Vision, the Energel does not bleed through paper.  I love writing with any pen that has a needle-point tip, as this pen does, and the 0.5mm size is ideal.  (0.4mm or less is not ideal in all situations, since it makes my handwriting so small, and 0.7mm or more is just too wide for me to feel comfortable with and write neatly with.)

The writing experience is effortless and the ink is a deep blue with a slightly greenish tinge compared to other blue pens that I own.  The ink feathers very slightly on some papers, but this is hardly noticeable unless you are exceedingly picky.

The pen itself has a stylish, yet business-like and professional, appearance.  The grooved hard rubber grip is surprisingly comfortable.  Unlike the grips of many pens, it is long and actually covers all parts of my hand that are gripping the pen.  Of course, this may not be true for you depending on the size of your hands (mine are probably about average) and the way in which you hold pens.  One complaint: the barcode is printed directly on the body of the pen.  Again, I much prefer barcodes printed on stickers that can be peeled off.  Oh, well...

Overall, however, the needle-tipped, 0.5mm Pentel Energel is an excellent pen.  Highly recommended.
Posted by Heather at 9:37 AM 6 comments:

For many months, I felt that I did not really belong in the pen and paper world - for the simple reason that I had never owned or used a fountain pen.  On nearly every pen blog that I could find, there were people raving about fountain pens and inks and I didn't have a clue what they were talking about.

However, this is the case no longer.  I am now the proud owner of my very first fountain pen, even if it is simply a Platinum Preppy that only cost me $3 at JetPens.  I was absurdly excited about it when it first arrived, and couldn't wait to start writing with it. 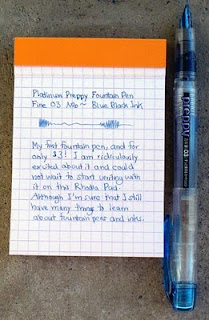 This is not going to be a proper review, since I have not used any other fountain pens to compare this one to.  Rather, I would like to share with you my thoughts on using a fountain pen for the first time.

First, I received a minor shock when I realized that I had insert the cartridge myself before using it.  Being used to pens that are ready to write with as soon as you take them out of the package, I was at first a bit puzzled at what to do.  However, inserting the cartridge proved to be very simple to do, and I experienced no difficulties.

Second, it is going to take me some time to get used to holding the pen in only one position while writing.  I keep unconsciously rotating it in my hand as I normally do and then wondering why the pen has stopped writing.  The Preppy has a completely smooth plastic grip which does not make this easier, and to make things worse, the top and bottom sections of the pen occasionally start coming unscrewed (probably because of my unconscious rotating of the pen) and then the pen will begin rattling in an alarming way until I realize what has happened and screw it together again.  As I said, this will take me some time.

Third, the blue black ink is much lighter than I expected; I quite like this colour and it seems to be exactly the same shade as denim jeans.  When I write with it, portions of the line are darker and portions are lighter; I'm sure there is a technical term for this.  I like the effect - it gives depth to my writing.

Fourth, the feel of the pen while writing with it is very different from a ballpoint or gel pen or any other pen that I have ever used.  It is very hard to describe and probably only other people who have used a fountain pen will know what I'm talking about.

Be sure to check out the 11th Carnival of Pen, Pencil, and Paper over at Tiger Pens Blog.  As usual, there are many excellent articles and reviews, even including one of my own pen reviews.
Posted by Heather at 5:57 PM No comments: 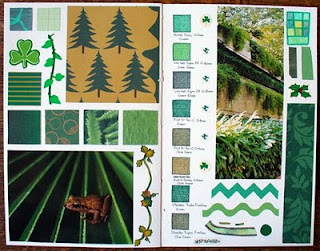 I have recently made myself this small pamphlet, which is dedicated to an exploration of the colour green.  Included in the book are bits of green paper: scrapbooking paper, wrapping paper, origami paper, cutouts from magazines, paint chips, etc., as well as green stickers and samples of all of the green paints, pencils, pens, markers, and even crayons that I could find.


The inspiration was from iHanna's Blog, always an excellent source for those interested in art journals or just crafts in general.  Here are the links to her posts on her own book exploring the colour pink, as well as to her book review of Exploring Colour, which was the inspiration for her pink book:
Here is another page spread from the green book: 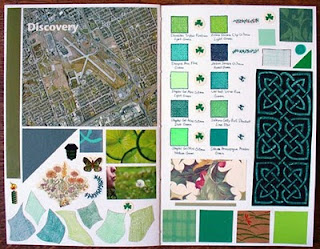 If you are looking for brilliant, eye-catching colour, then the Sakura Gelly Roll Moonlight may be the pen for you.  I picked up the fluorescent yellow, and am very impressed with how bright the colour is.  It is a fun pen to write with, and I suspect that it would be popular with children.

The yellow ink shows up well on both dark and light paper (athough unfortunately the sample on white paper did not show up in the photograph), which I was not expecting from a pen with such light-coloured ink.  The fluorescent colours apparently will glow under a black light, but I was unable to test this since I do not own a black light. 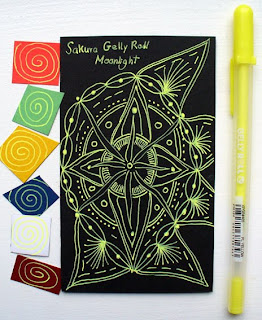 The Sakura Gelly Roll Moonlight has a similar design to the standard Gelly Roll, with the exception of a small motif of a crescent moon and star on the clip (in gold) and beside the name "Gelly Roll" in white.  I must mention again that I really dislike how Gelly Rolls have the barcode printed directly on the body of the pen.  In my opinion, this gives the pen a cheap appearance.  I much prefer the barcode on a sticker which can be peeled off, as with the Zebra Sarasa.  I also wish the Gelly Rolls had a more substantial clip; the one they do have feels quite flimsy.

The ink dries slowly, so caution needs to be used so that you do not smear the ink.  This pen does not seem to write as smoothly as the other Gelly Rolls that I have tried: I did experience some skipping while drawing the mandala.  Still, it is acceptable and I am sure that I will enjoy using this pen in my art journal in the future.

Related reviews: QuinnCreative, The Poor Connoisseurs, The Missive Maven.
Posted by Heather at 1:28 PM No comments: