Although I own some pens that I love and that I reach for again and again, I own other pens that fall into the category of Pens I Never Want to Buy Again, and that I use only to use them up.  The below list does not include the worst pens that I have ever used, but rather my least favourite pens in my current rotation of pens.  These are only my personal opinions and you, of course, may have had entirely different experiences with these pens. 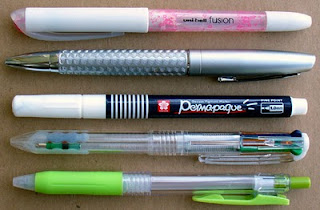 Not only is this pen pink (my least favourite colour), but also it is very prone to feathering or bleeding through on nearly all papers that I use.  Then there is the floral pattern on the barrel, which I didn't mind that much when I first reviewed it, but that I have now decided is definitely too girly for me.  There's just nothing about this pen that I like.

This pen was a gift that I received several years ago.  It looks very smart, with its sleek stainless steel body, but it is probably the most uncomfortable pen that I have ever written with and the quality of the ballpoint leaves much to be desired.  It is a "mystery" pen since it has no markings on it anywhere and I no longer have the original packaging; it came as part of a set with a mechanical pencil, which I actually broke the first time I used it.  (Don't ask me how; I have no idea.)

I know, this is actually a marker, not a pen, but it is so completely useless that it needs to be on this list.  I have enjoyed using the rest of my Sakura Permapaque Paint Markers, but this white one writes with an ink that could probably be best described as "invisible."  I have yet to discover any paper or surface that this marker will write on and do anything more than lighten the colour of the paper very slightly.  (I have recently discovered a new use for this marker, but that will be the subject of a future post.)

I thought I would love this pen, as I really enjoy the standard Hi-Tec-C, but I have been disappointed with it ever since I got it.  The ink cartridges run out very quickly and, especially as they have been running out, are very prone to air bubbles.  They also write erratically: some days they write well, other days they write only after some scribbling on scrap paper, and on a few occasions they have refused to write at all.  I know that Hi-Tec-C's are prone to this sort of thing, but the Coleto cartridges seem even worse than the standard pens.

The only reason this pen is on this list is because of the colour.  The light green (although nice) is just too light for me.  If you never want to read over what you have written, then you might not mind, but if you do, then this colour just doesn't stand out well enough on the page.  Other than that, this is an excellent pen: it writes smoothly and features a great clip.  One day I will try some of the other colours, and hopefully will have better experiences with them.

What about you?  What are the best and worst pens that you're currently using?
Posted by Heather at 12:57 PM