A Year of Pens, Pencils, Paper, and Notebooks 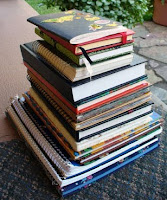 Unbelievably, A Penchant for Paper has now been around for one year!  I started this blog back on July 27, 2009, and have been posting (mostly) regularly to it ever since.  I have written reviews of many pens and a few notebooks, pondered complex philosophical questions related to paper and pens, and even shared pages from my journal with you.  I have really enjoyed this past year with this blog and am looking forward to future years.

What does the next year hold?  Probably more of the same, and hopefully more reviews of notebooks, pencils, and other products such as erasers, sharpeners, clips, inks, planners, rulers, etc. rather than just pens.  There may even be a GIVEAWAY in the future!

Today, I would like to share with you some of my favourite posts from the last year, one for each month.  Check them out if you want to see what I've been doing here for the last year, or simply if something catches your interest.

July 2009: Pentel Slicci 0.3mm: The first pen review here, and of one my favourite pens.

August 2009: Book Review: The Decorated Journal: This book was the first book on art journaling that I ever read, and it was a major inspiration for me when I first began keeping an art journal in December of 2008.  I would recommend it to anyone who is interested in keeping a journal of any kind.

September 2009: Pen in My Pocket: Staples Gel Mini: These are fun, very inexpensive little pens, ideal for kids.  I used them in my art journal because I didn't have to worry about destroying them by using them on the wrong kind of surface (I've done that to pens in the past).

October 2009: Uni-ball Fusion: I don't like these pens that much (even less so than when I wrote the review), but I like the review.  And there really wasn't much else that was interesting in October.

November 2009: Sakura Gelly Roll Stardust in Lime Star: In which the author becomes a bit ridiculous over a completely unpractical pen that writes in glittery lime green ink.

December 2009: What to do with a new notebook? The eternal question.  What to do when your steps have led you fatefully to the notebook shelf, and you have walked out of the store with your new precious notebook held tightly in your hands?

February 2010: From the Other Journal: This was one of only two posts in February.  It gives you a look inside one of my journals, at some (not too terrible) pages and sketches.

March 2010: Rite in the Rain Notebook: This remains one of the most popular and most commented-upon posts on this blog, although I'm not sure why.  It was a fun review to write (it involved spraying paper with water!).

June 2010: First Fountain Pen: Platinum Preppy: The first fountain-pen-related post here.  Does this post mark a new chapter in A Penchant for Paper or in my pen addiction?  I suppose we'll have to wait until another year passes to know the answer to that.
Posted by Heather at 6:03 AM