When I reviewed my first erasable pen (the Color-Pencil-Like version of the FriXion), I was skeptical of the very idea of an erasable pen.  Why not just use a pencil?  But erasable pens are starting to grow on me, so much so that I thought I'd try out the Pilot FriXion Ball, which is readily available at most stores in my area. 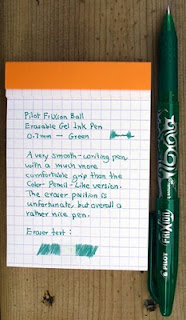 The Pilot FriXion Ball writes very similarly to the Color-Pencil-Like, but it is much more comfortable to use.  The Color-Pencil-Like had no grip whatsoever, while the Ball has a very nice tapered grip that is, I think, one of the best that I have used.

It writes very smoothly, and would be great to use even if you didn't care about the erasable part.  The green ink was a surprise - instead of the bright green I was expecting, it is more of a dull greyish green.  It is not necessarily displeasing, just different.

The eraser itself works reasonably well, although you do have to work at it more than you would with an ordinary pencil eraser, and after erasing, I could still see a (very faint) greenish tinge to the paper.

Overall, the Pilot FriXion Ball is a fairly nice pen, although if it was 0.5mm or smaller rather than 0.7mm I would like it even more.  I see that JetPens does have the 0.5mm version of the FriXion Ball as well as the 0.4mm FriXion Point, a pen that I would like to try.  Has anyone tried the Pilot FriXion Point and, if so, what did you think of it?