I have been unable to become terrible excited about the Uni-ball Vision RT.  Although there is nothing particularly wrong with this pen, it is probably best described as being of average quality.

First of all, although the writing quality is reasonable decent, this pen does not write nearly as smoothly as I had expected, especially as compared to the other Uni-ball Vision I own.  I experienced more than a little skipping, even on the smooth paper of my Rhodia pad.  In fact, the Vision RT seems to be an entirely different pen altogether from its non-retractable cousin. 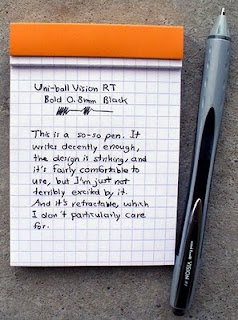 The Vision RT has one unique and interesting feature: it is designed so that when you lift the clip (for example, to clip the pen onto your shirt pocket), the tip of the pen is automatically retracted into the body of the pen.  This is supposed to help prevent leaks (because nothing is worse than an ink-stained shirt pocket).

The Uni-ball Vision RT also claims to have two other leak-prevention features: an "elevator ink system" and a "spring-loaded tip."  I'm not sure what an elevator ink system actually is (although it no doubt sounds impressive) and I've seen many pens with spring-loaded tips (although I'm not sure how, exactly, a spring in the tip of a pen prevents leaks).  The "auto-retractable clip," however, is something that I have never seen before and that I wouldn't mind seeing becoming a feature in more retractable pens.

Finally, the physical appearance of the Vision RT is fairly striking and the pen is of a shape that is comfortable to use.  But looks aren't everything and, despite the retractable clip, the disappointing writing quality makes the Uni-ball Vision RT an average pen.  There are many things I like about it, but I do not love it.