The Pilot B2P is a member of Pilot's BeGreen line of pens, and is made from recycled plastic water bottles, hence the name: B2P stands for "Bottle To Pen."  It is refillable with the popular Pilot G-2 refills.  Because this, there are no problems with the writing ability of the B2P; just as expected, it writes very smoothly and cleanly, with no skipping or bleedthrough. 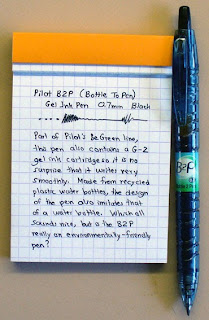 The most interesting and unique part about this pen is the pen body itself, which is made, as mentioned above, from recycled plastic water bottles.  The design of the pen even mimics that of a water bottle.  It is a rather funky looking pen and the grooved plastic grip and medium width of the body makes it fairly comfortable to use.

Overall, if you like the standard G-2 and you're looking for something just a little bit different or if you are environmentally conscious and want to choose a pen that has less environmental impact, then the Pilot B2P would be an excellent choice.  Or would it?

Excuse me if I rant a bit here, but I would like to point out that the B2P is still a plastic pen that required a certain amount of energy to produce, from the recycling of the water bottles to the creation of the pen itself, and to ship to the store.  Although it is refillable, I suspect that most people who buy inexpensive pens like these simply can't be bothered to buy refills, and when they are done with this pen, they will simply throw it in the garbage, where it will eventually end up as just another piece of plastic waste in a landfill somewhere.

Although being made into pens is a better fate for water bottles than being thrown away and while I also respect Pilot for trying to produce pens that are more environmentally-friendly, the B2P is far from ideal here.  If you really want an environmentally-friendly pen, get a good fountain pen, which can last for decades and can constantly be refilled with different inks, or use a pencil, especially one of those that is made from recycled materials.  Pens made from biodegradable plastics are also not a bad choice.

Don't be sucked into buying an item (a pen or anything else) just because the manufacturer has labelled it as "green."  If the environment is that important to you (and I hope it is!), think carefully before you buy and remember that the old fountain pen and ink may still be the best option.