I would like to show you a writing sample of the Stabilo Colorgel.  Unfortunately, I am unable to do so.  The problem?  The pen doesn't work.

Let's start at the beginning.  I bought this pen a couple months ago, at the university bookstore.  I tried it out in the store; the line seemed a bit fatter than 0.4mm, but it wrote fairly smoothly and the ink was a nice dark green colour.  I brought it home, and wrote with it off and on over the next couple of weeks or so.  A couple problems soon appeared.  The first was that the Stabilo Colorgel was not consistent in its writing ability - sometimes it wrote smoothly, sometimes the ink flow became much slower and the pen felt much scratchier.  The other problem was that the cap gradually became looser and looser until eventually it didn't fit at all and fell off if I turned the pen upside down.  The cap still posted on the back of the pen, not that it did me much good. 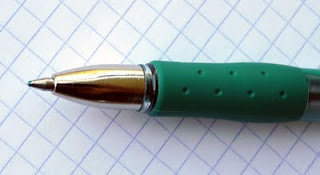 The semester ended, and I headed back home for the summer.  The pen sat unused for a couple of weeks.  When I pulled it out again, intending to review it, it didn't work.  I suspect that the loose-fitting cap may have contributed to the problem by allowing the pen to dry out, but given the pen's earlier inconsistency, it may not have.

Apart from these issues, the Stabilo Colorgel is not that bad of a pen.  A bit longer than usual, the barrel has a rather appealing swirl design.  The grip is, however, useless to me, as no part of my hand actually touches the grip when I am holding the pen (but maybe I just hold my pens in a weird way).  At this point, though, I really don't care about any of this since I can't even write with the thing.

Does anyone have any suggestions as to how I can get this pen to write again?  It is a gel pen, there's plenty of ink left in the barrel, and I can usually get a small amount of ink to come out of the pen when I first touch it to the page, although this quickly dries up as I continue to try to write with it.  Ideas, anyone?

Related review: The Pen Addict.
Posted by Heather at 12:49 PM