Pen?  I have my doubts... The Stabilo "Pen" 68 looks and writes suspiciously like a marker.  And just what does that number "68" mean, anyway?  Does it mean that there is a whole series of Stabilo Pens, from Pen 1 all the way to Pen 67, preceding it, or does it have some dark, occult significance?

Regardless, the Stabilo Marker, er, Pen 68 has a long, slim, hexagonal profile, similar to that of a wooden pencil.  The body and cap are the colour of the ink, and the body is enlivened with white stripes, which gives the marker, I mean pen, a rather funky look.  The marker pen lacks a clip, which doesn't bother me since I rarely use clips, although you may, of course, have different preferences.  The cap is small and, although it posts on the end of the pen, it feels rather loose when it does so (especially on the brown - the green isn't that bad).  This, combined with its small size, makes me fear that the cap could be easily lost.

As a pen, the Stabilo Pen 68 is a fail.  Its somewhat chunky felt tip writes with a line that is way too broad for my liking.  I also suspect that the tip may become even softer, and therefore broader, with further use.  The felt tip feels fairly firm now, but it is softer on the green than on the brown, leading to a difference in the width of the line produced by the two colours, which can be seen in the writing sample below.  I wouldn't recommend the Pen 68 as a pen unless you have large handwriting and enjoy writing with markers, or with markers that are masquerading as pens. 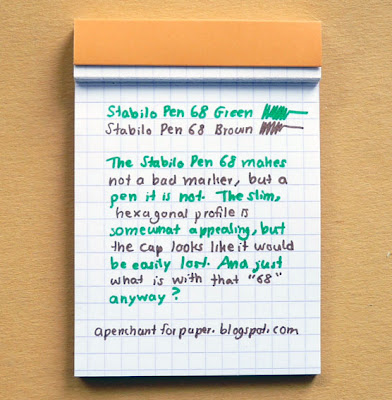 As a marker, the Stabilo Pen 68 is fairly decent, although unremarkable.  The colours are bright, the lines are fairly crisp (at least at the time of review, when the markers pens are still relatively new).  Although a fairly broad pen, it makes for a fine- to medium-tipped marker, which means that I'll probably be using it for colouring and adding bits of colour to my mandala drawings.

If you're expecting an everyday writing pen, look elsewhere than the Stabilo Pen 68.  On the other hand, if you're looking for a simple, inexpensive marker, the "Pen" 68 would not be such a bad choice.

And finally, a note to Stabilo: Your "Pen" 68 is not a pen.  It is a marker.  I would appreciate it if it was labelled accordingly.

Related reviews: On Fountain Pens, Spiritual Evolution of the Bean.
Posted by Heather at 8:30 AM