Have you ever used a non-sharpening pencil?  I used to use these all the time back in elementary school, after I stopped using wooden pencils and before I discovered mechanical pencils.  I remember that I used to think that non-sharpening pencils were so cool, and I could entertain myself for far too long popping the leads in and out.  I hadn't thought about these pencils for years until I discovered a handful of my old pencils in my mom's desk. 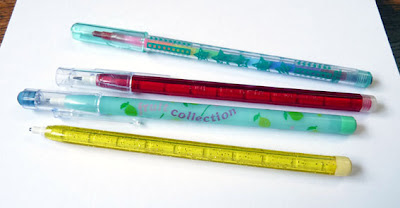 But what is a non-sharpening pencil (sometimes also called a pop-a-point pencil)?  Well, it consists of a plastic body that contains a series of pencil leads (eleven of them, oddly enough).  Each lead is about half a centimetre long or thereabouts, and is attached to this little white plastic thingamagig (don't mind my overly technical language here!).  When one lead wears down, you can simply pull it out of the top, push it into the bottom, and ta-da!  A new sharp pencil point will be revealed.  No sharpening required.

Eventually, of course, all of the points become worn down and you end up spending most of your time simply snapping the leads in and out, searching fruitlessly for one that is slightly less worn down than the others.  Not that that's not entertaining in itself, of course.

The pencils were made by Bensia, and came in a variety of colours and styles.  One of mine (the green one that says "fruit collection" on it) was even scented, although the scent is long gone by now.  The pencils came with a plastic cap with an eraser on the end (so that when the cap was posted the eraser would be in the correct location for erasing), although one of my pencils has lost its cap and another has lost its eraser.  And the plastic caps are also very prone to cracking - all of my surviving caps have cracks in them.

My most prized non-sharpening pencil was the one with the coloured leads.  It contained eleven different colours (red, pink, orange, yellow, light green, dark green, light blue, dark blue, purple, brown, and black), each of which was, of course, only allotted a half a centimetre of lead each.  Being the crazy kid that I was, I never used this pencil but saved it for a special occasion that never came - with the result that I still have this pencil today, relatively pristine except for the inevitably cracked cap.

I'm not sure if Bensia still makes these pencils, but I did a quick search and discovered that you can still buy them on places like eBay and Etsy.  I haven't seen them in a store for years.  Back when I bought mine, I remember they were being sold next to the till at the hardware store.  I can't see them ever being more than a novelty item.  Mechanical pencils are much more practical.  Although it would certainly be possible to refill a non-sharpening pencil, I rather doubt that refills were ever sold separately from the pencils.

Have you ever used a non-sharpening pencil?  Do you have any other favourite school or office supplies from your childhood that you have saved or that you remember fondly?
Posted by Heather at 6:00 AM