Welcome to my second review of a wooden pencil!  Except... wait a minute... this pencil is not made of wood at all - it's made of recycled newspapers.  It's an Earthzone Recycled Pencil, and I really love the look of it.  The pattern of the newspaper is still clearly visible on the body of the pencil, reminding me of papier mâché.  Remember doing that back in elementary school?  You'd tear all these newspapers into strips (turning your fingers grey with ink), dip them into this thick gluey mixture, and stick them down in layer after messy layer on some kind of mold.  When it dried, it created a hard surface that you could then paint and finish.  Bowls were popular, I remember.  And I also remember in grade seven we used balloons as a mold, then added ears and a curly tail and they became fat, round pigs.

But I digress.  Let's get back to the pencil, shall we?

The Earthzone Recycled Pencil is round, rather than hexagonal.  After writing with it, I have decided that this makes it slightly less comfortable to write with than a hexagonal pencil, although that is, of course, merely my personal preference.  It also means that it may be slightly more prone to rolling off your desk than a hexagonal pencil.  The name of the pencil is printed in shiny blue letters on the side, and the pencil is finished off with the standard ferrule and pink eraser. 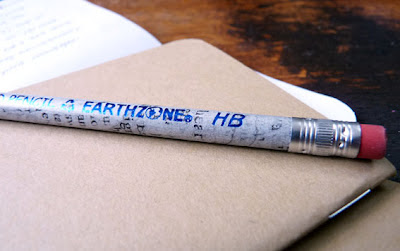 As for how it writes, the lead seems a touch darker than that of the Dixon No.2/HB which I reviewed earlier, although the lead feels like it is wearing down a bit faster.  I've only written about three paragraphs so far, and I'm already starting to feel the need to re-sharpen. 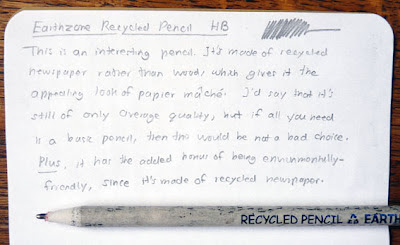 Speaking of sharpening, this pencil doesn't sharpen too badly, although the shavings are noticeably different than wood shavings.  They're white and crumbly and generally remind me of... dried papier mâché.  Although I had no problem with the lead breaking, the pencil did not sharpen particularly cleanly: some rough, papery edges were left around the base of the lead and I found it difficult to get a really sharp point.  I should say, however, that these issues may be simply due to my wimpy pencil sharpener and not the pencil itself. (I think that if I continue writing with pencils, I'm going to have to invest in a better pencil sharpener.)

The eraser is also not too bad.  Although it has somewhat of a rough, grainy feel, it does erase relatively cleanly, and I would see no problem with using it for small amounts of erasing.  (Large erasing jobs would probably be best done with a separate block eraser.) 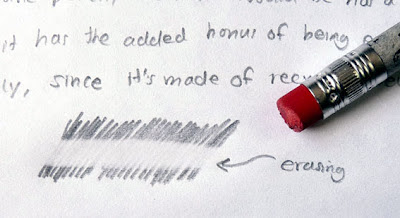 Overall, I'd say that the Earthzone Recycled Pencil is not a bad choice for a basic pencil.  While it's still a low-end pencil, it is also clearly an improvement over the Dixon No.2, and receives bonus points for being environmentally friendly since it's made of recycled newspaper.  This would probably be a great pen to get for your kids, or for yourself if you're just looking for a basic pencil.  And if you're not too fussy about your pencils, why not choose the recycled option?
Posted by Heather at 6:30 AM