Stabilo Point 88 pens are first cousins to the Stabilo Pen 68 which I reviewed earlier this year, although the Point 88's are, I am glad to say, much more like pens than like markers.  Again, however, I find myself puzzled by the cryptic numbering.  Just what does that "88" mean, anyway?  I assume that it refers to the nib size in some way, but how? 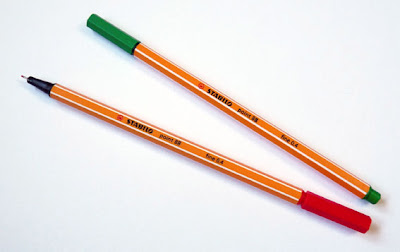 But let's get back to business.  The Stabilo Point 88 is a felt-tip pen similar to the Sharpie Pen, Marvy Le Pen, or Staedtler Triplus Fineliner, but is less expensive than any of these (Point 88's sell for 80 cents each at JetPens).  It is marked as 0.4mm, but because it has a softer tip than, say, a gel pen, it actually writes with a slightly wider line than you might expect - perhaps around 0.5mm or a bit more, in my totally non-scientific estimation.  It feels similar to the 0.3mm Staedtler Triplus Fineliner, and a bit finer than the Sharpie Pen or Marvy Le Pen.  It writes very smoothly and crisply and the colours are bright.  I expect that, as it is a felt-tip pen, the tip might wear down and spread out a bit over time, but I've been using my Point 88's for a couple of months now and they are still firm and crisp.  On poorer quality papers, the ink does show through a bit, although the back side of the paper still remains usable, and on better papers there is no show through at all. 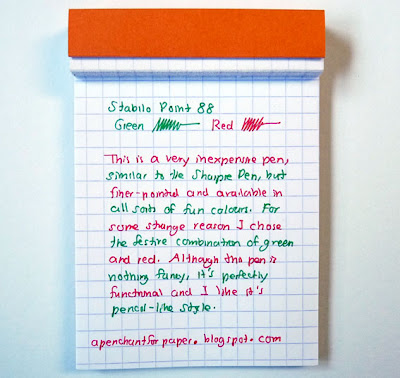 The Stabilo Point 88 is designed, like the Pen 68, to resemble a wooden pencil.  It has a long, narrow, hexagonal body with no grip or clip and, unlike the Pen 68, the Point 88 is even the same yellow-orange colour as a typical wooden pencil.  (The Point 88 is actually identical in appearance to the Pen 68 in every respect except this.)  As I've already discovered with wooden pencils, the hexagonal shape is surprisingly comfortable to write with and the lack of a grip doesn't bother me.  The lack of a clip might be an issue for some, but it doesn't bother me as I rarely use clips on pens.  Ink colour is indicated by the knob on the end of the pen, and by the cap.  Be careful with that cap, by the way.  It is so small that I would imagine it could be easily lost if you didn't make sure to post it securely on the end of the pen every time you took it off. 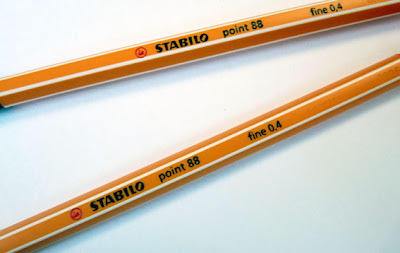 The Stabilo Point 88 is a surprisingly decent pen for the price.  It is a low-cost alternative to the Sharpie Pen and, frankly, unless you needed a waterproof pen or you had a strong preference for the look and feel of the Sharpie Pen, I don't know why you'd pick the Sharpie over the Point 88.  And the Point 88 is available in a much wider selection of colours.  The store where I bought my Point 88's sadly didn't have too many different colours in stock, so I just ended up with the strangely festive combination of red and green, but there are a lot more fun colours available, such as azure blue, dark ochre yellow, and light lilac purple.  The pens are also available in sets of up to 25, so you can sample all of the colours at once. 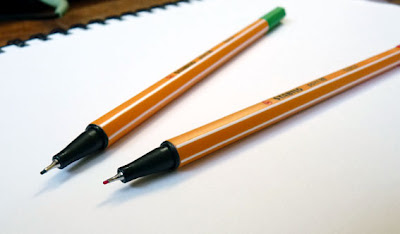 Overall, I'd say that the Stabilo Point 88 is a great basic pen.  There are other pens in my pen case that I like more, but I would not hesitate to recommend the Point 88 if you're looking for a cheap, functional pen that comes in a wide selection of colours, and especially if you like the Sharpie Pen but want something cheaper and more colourful.  A set of these would be great to have on hand for doodling and sketching, but they are also great for everyday writing.  And at that price, it's hard to go wrong.

Related reviews: The Pen Addict, Amy (Up North), Paint Daubs, On Fountain Pens, The Pen Chronicles (review of the mini version).
Posted by Heather at 5:30 AM