Recent Acquisitions: Pens and a Pair of Pencils

I like to do occasional posts showing you the items that I've recently acquired.  This batch of items consists of a bunch of pens, as well as a highlighter and a couple of intriguing pencils. 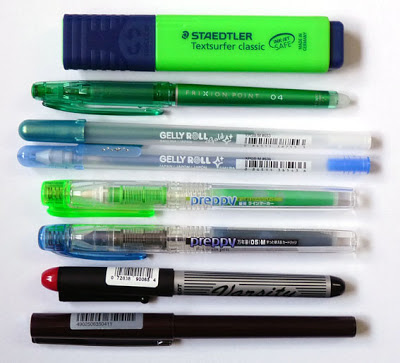 From top to bottom:


"Hmm, 5 dollars isn’t much… but if I had to choose, I would say the smallest Rhodia Pad (2 by 3 inches, for $1.60) because Rhodia paper is always awesome and I will need some good paper to use with all the great pens in your giveaway, and a Rhodia wooden pencil ($1.90) because I’ve always wanted one and because I should have a pencil as well as some pens, and finally a Seed Anatas Eraser because I’ll need an eraser to go with my pencil and because it looks cool and because it costs exactly $1.50, which is all that I have left at this point. All of that adds up to exactly $5.00. And I haven’t included any pens because if I win your giveaway then I won’t need any more pens! Well, not for a few days, anyway…"

I'll be reviewing some of these pens in the coming weeks and months, so stay tuned for that! 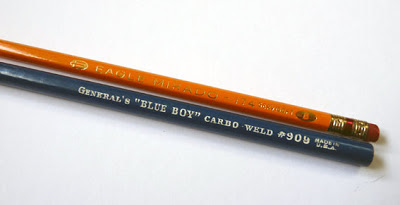 Along with all those pens, I also recently picked up these two pencils at the thrift store.  Neither pencil has ever been used, and both were in with a whole bunch of kid's novelty pencils.  These were the only two interesting ones.  The top pencil is an Eagle Mirado made in Canada, and it seems vaguely familiar to me, so I think I must have seen some around when I was younger.  The bottom pencil is the one that I find the most interesting.  It is a General's "Blue Boy" Carbo Weld #909 made in the U.S.A.  I've heard of General's pencils, but I have absolute no idea what "carbo weld" means and I can't seem to find any information about this pencil on the Internet.  Does anyone know anything more about it?  It looks like an intriguing pencil and I'd love to know more about it, especially about when it was likely made.  And if you know more about the Eagle Mirado, feel free to share that information as well!

So what new pencils and pens have you acquired lately?
Posted by Heather at 6:00 AM