The Staedtler Norica can be thought of as the poor cousin of the Staedtler Mars Lumograph.  At first glance, you might even mistake the Norica for the Lumograph.  Both are blue, hexagonal wooden pencils, but the Norica is a duller, almost grey blue, and it has a silver-tone ferrule with a white eraser on the end - features that the Mars Lumograph lacks.

Another good clue?  The Norica is also much more affordable than the Lumograph - not surprising for a pencil that is marked as a general everyday writing pencil rather than as an artist's sketching and drawing pencil.  But the Norica is actually quite a good general everyday writing pencil.  The lead is nice and dark, and that eraser on the end isn't bad either.  It wouldn't be very good for any large-scale erasing, but for making a quick correction to your writing, it erases quite cleanly and well. 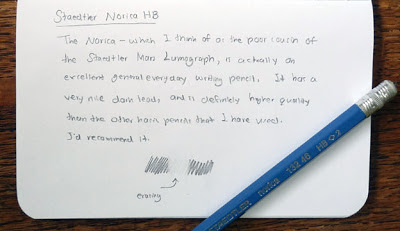 The eraser is also latex-free, the lead is supposedly "break-resistant", and the Norica is available in two degrees, HB and 2H.  Based on this post at pencil talk, it looks as though different versions of the Norica may exist, depending on what part of the world you're in.  Mine's from Canada, and I can't say anything about any of the others out there.

Overall, I really like this pencil.  If I hadn't already discovered the Lumograph, the Norica probably would have become my favourite wooden pencil.  It is step above similar everyday writing pencils (such as the Dixon No.2/HB, which is by far the most commonly used pencil (or at least the most commonly lost pencil) in local schools), yet it is still easily affordable.  If you're looking for a good basic pencil, I wouldn't hesitate to recommend the Staedtler Norica.

Related review: pencil talk.
Posted by Heather at 10:09 AM