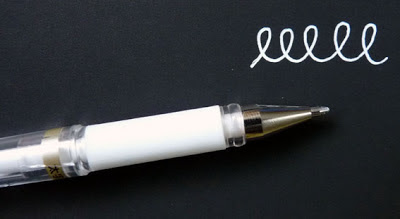 I don't own very many pens that are suitable for writing on dark paper.  Writing on dark paper isn't exactly something that I do a lot of, but pens for dark paper do come in handy for art journaling, where I may need to write on a coloured background.  And I don't see why you couldn't use dark paper for some of your personal notes and memos to yourself as well - just for fun.

I recently did a quick test of some of the pens I own to see how suitable they were for writing on dark paper.  Here are the results:

The first pen I tried was the Uni-ball Signo Broad white gel pen (1), which was undoubtedly the best pen for writing on dark paper.  It lays down a smooth, bold line that is nearly opaque.  While I usually prefer finer-tipped pens for writing, for some reason a bolder line looks better on dark paper than it does on white paper.  While I only own the white, these pens are also available in a range of colours, including silver and gold.

Next I tried a handful of Sakura Gelly Rolls.  The standard white Gelly Roll (2) was okay.  It didn't write as smoothly as the Uni-ball, and the line was noticeably more transparent (in the photo above, the white Gelly Roll looks grey compared to the Uni-ball), but is more widely available than the Uni-ball.  The Moonlight Gelly Rolls (3) worked well.  They wrote smoothly and the fluorescent colours really popped on the black paper.  But they were still had a slight transparency to them and were not as opaque as the Uni-ball.  The Stardust Gelly Roll (4) was a fail.  You can still read it, but the ink doesn't stand out at all.  The final two Gelly Rolls, the Silver Shadow (5) and Gold Shadow (6) also worked fairly well.  They didn't pop quite as well as the Moonlights, but they still wrote smoothly and were easy to read on the dark paper.  (The photo doesn't do them justice.)  Their ink was also opaque, with none of the transparency of the others.

The 0.8mm metallic Pentel Slicci (7) wrote smoothly, but is a bit muted and slightly transparent.  (The photo makes it look duller than it really is.)  It's acceptable, but it wouldn't be my first choice.  The Sakura Permapaque Opaque Paint Marker (8) continues to disappoint me.  While these markers are great on light papers, they are simply too transparent (despite their name of "opaque") to use on dark paper.  I tried the yellow one here and, while I can still read it, it does not show up very well and it's hard to even tell what colour it is supposed to be.  The Zebra Sarasa SE gel pen (9) actually wasn't as bad as I thought it would be, since it is not marketed as a pen for dark paper.  The ink is easy to read and maintains its colour, although it is a bit dark.  It wouldn't be my first choice, but it's not that bad either.  I knew the Uni-ball Signo DX 0.38mm gel pen (10) wouldn't work very well, and I was right.  If you hold the paper at the right angle, you can read it, but otherwise it fades into obscurity.  My final "pen" was the Sharpie Gel Highlighter (11), which I thought might have worked well - but it didn't.

Overall, the Uni-ball Signo Broad was the clear winner, with the Sakura Gelly Roll Moonlight coming in second.  One thing that I don't have yet is a good marker that writes on dark paper.  Two markers that I have my eye on are the Sharpie water-based paint marker and the Uni-Posca paint marker.  Have any of you tried those?

Do you ever write on dark paper?  What are your favourite pens for doing so?
Posted by Heather at 6:30 AM