It all started innocently enough, with a modest JetPens order that I placed for my birthday - not even enough items to really qualify for a recent acquisitions post.  But, before that arrived, I acquired a bag full of pens and other items from the thrift store.  Even after I picked out the items that I didn't want and threw out the few things that didn't work, there was still a lot remaining.  After my JetPens order finally arrived, this is what I was left with: 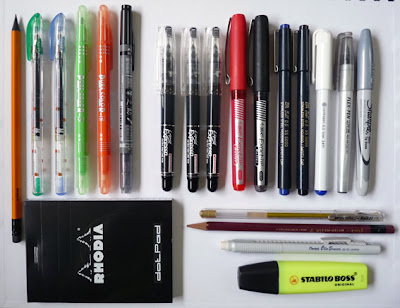 And secondly, on the right side, from the thrift store: three Sanford Liquid Expresso Extra Fine Line Pens in black, Bic Exact-Tip Rollers 0.6mm in red and black, Kuretake Zig Ball 05 pens in blue and black, Centropen 0.3mm Liner 2811 in blue, a Sun-Star "Flex-Pen" in black, a metallic silver Sharpie marker, and (on the bottom), a Pentel Hybrid Gel Roller in gold, a Mitsubishi Uni wooden pencil in F, a Pentel Clic Eraser, and (finally) a yellow Stabilo Boss highlighter.

I attempted to look up most of the thrift store pens online, and many of them are no longer being produced or are being produced in updated versions, so I'm guessing these pens have been around a while.  I was unable to find any information at all on the Kuretake Zig Ball pens and the Sun-Star Flex Pen (which has such an odd-looking nib that I may have to do a separate post on it later).

I will be reviewing some, but not all, of these items in future months, but right now I am still getting over my excitement at having so many new pens and other items to add to my collection.  Seriously, I think this is the most pens that I have ever acquired at one time.

And if that wasn't already more than enough, the bag from the thrift store also included a massive amount of refills and ink cartridges - none of which, strangely, were actually for the pens they came with. 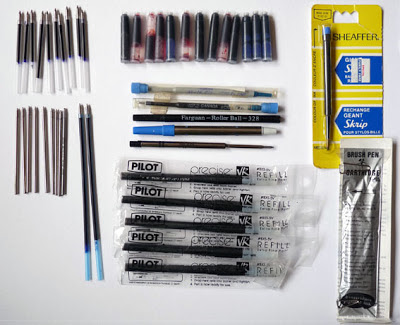 There were actually about a dozen or so more refills than this, but they ended up fitting into some of my mom's ballpoints, so I gave them to her.  I'm not sure what I'm going to do with these refills, because I don't think any of them even work with any of my pens, especially the mini ballpoint refills in the top left corner.  I tested all of the refills that weren't in packages, and they all work, so I don't really have the heart to throw them out.  Most are ballpoints, but there are a few rollerball refills in there too.  The refills in the lower middle are clearly marked as for the Pilot Precise pen, while the refill in the silvery package in the bottom right corner is for a Pentel brush pen.  I would like to be able to use the ink cartridges in the top row, but they are unmarked, so I'm not sure what kind of ink they contain or even whether they would fit into any of my pens (and not knowing what the ink is, I'm a bit hesitant to try one out).  If you have any suggestions for what to do with these refills I would really appreciate it!

And those are (thankfully) all of my recent acquisitions (for now).  Are you familiar with any of these items?  What have you acquired lately?
Posted by Heather at 10:57 AM