The Centropen Liner 2811 was part of the bundle of pens and refills that I found at my local thrift store last month.  I have no idea where the original owner found this pen, because Centropen is a Czech company that doesn't appear to be very well known among most pen bloggers.  They produce a wide variety of pens and markers, one of which is this 0.3mm fineliner pen.

The Centropen Liner 2811 is a 0.3mm plastic-tip pen available in black, blue, red, and green.  It's slightly interesting in appearance because it has a white barrel, which is uncommon among pens, although it might not be ideal if you tend to have inky fingers.  I like the round design of the cap, but the plastic has a cheap feel to it, and the pen generally feels very light in the hand and has a vaguely institutional look to it that I don't really like.  Ink colour is indicated on the tip and on the end of the pen (not shown in my photos).  It's a basic design but functional and, while I'm not getting excited about it, I have no major complaints either.  It works. 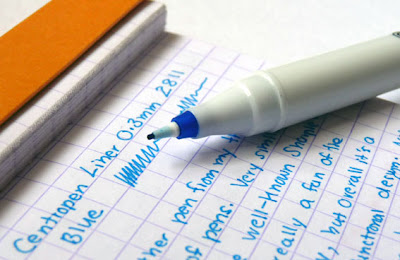 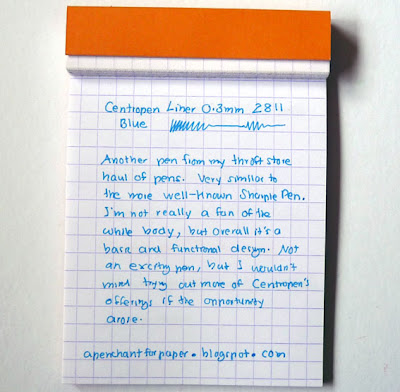 Overall, the Centropen Liner 2811 is a decent basic pen.  I think that for those living in North America, there are enough similar pens available here (Sharpie Pen, Marvy Le Pen, Stabilo Point 88) that this one doesn't really need to be an option.  Unless you really fall in love with the design of it for some reason.  Or unless you're a crazed pen blogger who is obsessed with trying out every different pen you can find.  Which may certainly be the case.  Speaking as a crazed pen blogger, I certainly wouldn't mind trying out other Centropen pens if I come across any in the future, but, unless you live where these pens are more readily available, this pen is probably not one that I would recommend you seek out.

Have you tried any of Centropen's pens or markers?  What did you think of them?
Posted by Heather at 6:00 AM