My gluebook journal was the largest journal I ever worked in.  It was an 11 by 14 inch spiral-bound sketchbook that began its life as something that I called a scrapbook - a book to collect images that appealed to me.  Over time and as the pages got fuller, I began calling it a gluebook, and then, finally, a full-fledged art journal, as I realized that the book had become more than a simple collection of images and more of an exploration into design and colour.  It is still a gluebook, however, as I restricted myself throughout to collage and pen work only, no painting. 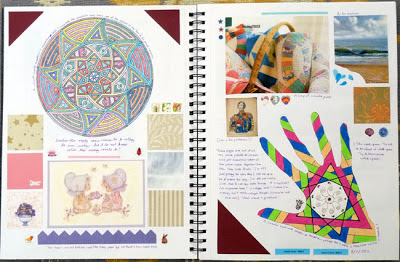 Because my gluebook journal is also one of my thickest journals, it took me over two years to finish it, from the summer of 2010 to the fall of 2012.  It has a lot of pages, which made it difficult to pick my favourite page spread.  I kept coming back to this one, however, probably because it represents the time when my gluebook was starting to transition from a scrapbook to an art journal, and because it represents a nice mix of both found images and remnants of previous art projects.  The paper scraps include an old greeting card, cutouts from magazines, parts of calendar pictures, squares of scrapbooking paper, cardstock triangles, and stickers.  I also included a mandala that I coloured with pencil crayons (a leftover from the days before I drew my own mandalas, but simply found them online, printed them out, and coloured them) and a hand-mandala (or "handala") that I think I originally created way back in high school (a while ago, but I saved it).  (There were originally two hands; the other hand appeared in this earlier art journal page.)

Have you ever kept a journal that could have been described as a scrapbook or gluebook?  What sorts of things did you keep in it?

Other pages from this journal: The Scrapbook Journal; Checking In: Sketchbooks, Gluebooks, Art Journals; The Gluebook Becomes an Art Journal; Collage Tree. 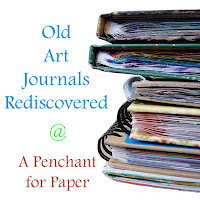 Old Art Journals Rediscovered is a series of posts dedicated to rediscovering the art journals that I have created over the past four years. In each post, I will introduce you to one of my old art journals, and share with you one page spread from that journal - not the page spread that is the prettiest or the fanciest, but the one that speaks most clearly to me today. I hope that by sharing with you the evolution of my own art journals, you will feel inspired to start your own explorations with art.
Posted by Heather at 6:00 AM