Like the Bic Exact-Tip Roller I reviewed earlier, the Sanford Liquid Expresso Extra Fine Line Pen was another thrift store find.  Also similar to the Exact-Tip, this is an older pen that may no longer be available in the form that you see in my photos.  It may also be called the PaperMate Liquid Expresso, and on some sites where it was being sold, it appeared in the photos as the Liquid Flair (although the seller still described it as the Liquid Expresso).  So all of that's a bit confusing, but it does seem that this pen is still available, in some form.


Let's move on to less confusing topics.  The Liquid Expresso is a liquid ink, porous point pen.  In appearance, it's actually quite similar to the Exact-Tip Roller, although it lacks the Exact-Tip's cushiony grip.  The spring-loaded clear plastic cap in turn reminds me of the Platinum Preppy fountain pen.  It has a wider barrel, which I don't mind, but I know that some people don't like wider barrels.


My main problem with this pen is the grip area, which has two sharp plastic edges which are positioned exactly to rub on my thumb and forefinger (I've helpfully pointed them out for you in the photo below).  I seriously don't get why anyone would make a pen like this.  And it's a problem I've encountered many times before.  Doesn't anyone realize that sharp edges aren't comfortable to hold while writing?  In this case, I can tolerate the edges, but I suspect they might feel worse if I was writing for a longer period of time.  This may or may not be an issue for you depending on how you grip your pens.


The best part of this pen is the way it writes.  It is very smooth and inky (relatively wet-writing), with no scratchiness or skipping, and the ink is a gorgeous deep black colour.  It does bleed through cheaper papers, and it even feathers and shows through on Rhodia paper.  But I guess that is the price to pay for the smooth inkiness.  Just don't be fooled by that "extra fine line" business.  This is not a particularly fine pen; I would say it's comparable to a 0.7mm gel.  It's not my ideal line width, but is still acceptable for everyday writing.  If the line actually was extra fine, then I think this could easily become one of my new favourite pens, but as it is...  It's a great pen, but not for me.

The name also bugs me.  I keep calling it "espresso" instead of "Expresso." 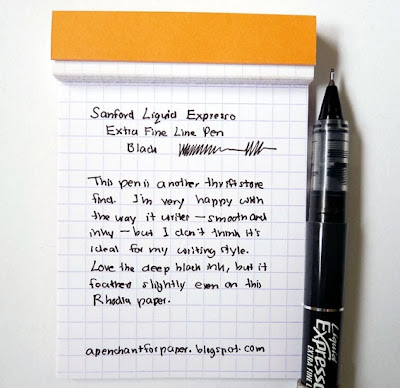 Overall, the Sanford / PaperMate Liquid Expresso / Flair "Extra Fine Line" Pen (or whatever it's called) is not a bad pen.  It writes very well, especially if you like medium to wide line widths.  I would love to hear from anyone who has tried the more recent versions.  If the issue with the edges in the grip area was fixed, I think I'd feel a lot more positive about this pen.  As it is, it's not ideal for my writing style, but I still think it's worth a try, if you happen to run across one.
Posted by Heather at 11:22 AM