I don't have a lot of experience with brush pens, but the Tombow Fudenosuke caught my eye and I had to try it out.  Although this brush pen is available in single-tip versions (both hard and soft), I chose the twin-tip - black on one end and grey on the other.  While I still have much to learn about using brush pens, my experiences with this brush pen have been a lot more positive than they have been with the other brush pens that I have used. 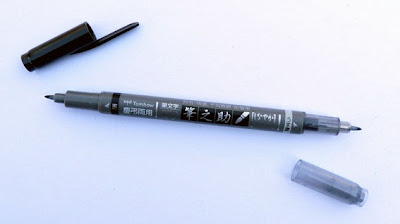 The Tombow Fudenosuke brush pen has both a finer and firmer tip than that of the other brush pens I have used (the Sakura Pigma brush pen and the Faber-Castell Pitt brush pen).  Because of this, I have found that this pen has less line variation, making it feel more like a "normal" pen and easier for me to use.  I can still get some line variation to play with in my sketches, but - unlike with those other brush pens - it feels more controlled and I don't have any big fat lines messing up my work.  I also find this pen easier to write with (and it would make a fine writing pen if you didn't want to sketch with it at all).  I am happy that I have finally found a brush pen that I actually enjoy using.


As I mentioned above, I'm using the twin-tip version with black and grey tips.  So far, I feel conflicted about whether I like this feature or not.  It's more convenient, because I can carry one pen instead of two.  But so far I mainly use the grey ink for adding shadows to sketches, and to me the grey seems a bit dark for this.  Because I use the black more than the grey, the black will probably run out of ink first.  And to me the grey tip feels slightly softer than the black tip, and so I don't enjoy using it as much as the black.


Like most art/sketching pens, the Tombow Fudenosuke has a very basic design.  For the most part, it works.  The main problem I have with this pen is the caps.  The black cap fits very tightly, so much so that it can be difficult to snap it back on after removing it.  Once I thought I had put the cap on but in fact I had not pressed it on hard enough and it fell off while in my pen case.  When I saw what had happened I was afraid that the ink might have dried out, but luckily it had not.  The grey cap has the opposite problem - it feels almost too loose, making me afraid that it may fall off.  Still, as I use this pen more, I am getting used to both of these issues and they seem less important now than they did at first.

Overall, the Tombow Fudenosuke is still my favourite of the brush pens that I have used so far.  Although I would probably choose the single-tip hard version in the future, I enjoy sketching with this pen and playing with the black and grey inks together.  Even my Faber-Castell Pitt pens (usually my first choice for sketching) have been getting neglected lately as I've been reaching for my Fudenosuke instead.  I would recommend this pen, especially if you haven't used a brush pen before or if you have been unsatisfied with other brush pens that you've tried.  And unless you really love the idea of having black and grey inks together in a single pen, you'd probably be best off sticking to one of the single-tip versions.

Related review of the twin-tip brush pen: No Pen Intended.

Remember to send your questions in for my upcoming question & answer post!
Posted by Heather at 10:57 AM