Last month was the pen and pencil edition, so of course this month had to be the notebook and paper edition.  This will probably be the last themed miscellany for a while; we'll be back to the usual routine next month.

From the Archives: Art Journals

I started my first art journal in late 2008 - around the same time when I started my first blog and made the difficult decision to change to a different program at university.  It was also a time when I was dealing with feelings of despair and hopelessness, and working in my art journal gave me a positive focus that helped me to keep moving.  I've kept quite a few different art journals since then, but I don't talk about them as much on this blog anymore.  My focus has shifted away from painting and collage to drawing and sketching.  I'm now more interested in keeping a sketchbook than I am in keeping what most people would think of as an art journal.  And since I graduated from university, I've been focusing on my writing and more of my creative energy has gone into that instead of into my journals. 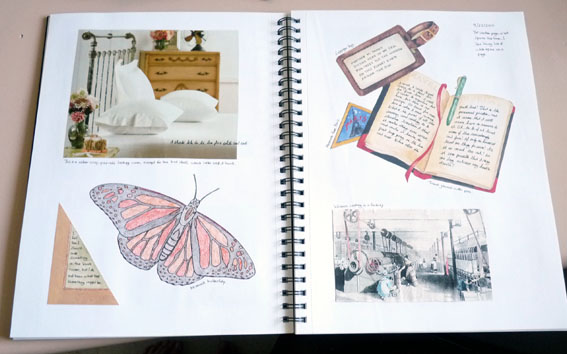 I still love looking back at my old journals, though, so here are some of my best art journal posts from the archives:
~~~
In July of this year, A Penchant for Paper will be five years old. As part of the celebration, I'll be delving into this blog's archives and sharing with you some of the best posts from the past five years (with a focus on older posts that newer readers might not have seen).﻿
Posted by Heather at 6:00 AM 3 comments:

When I was choosing my first fountain pen inks, I had my eye on two J. Herbin inks - Vert Olive and Orange Indien.  I liked the look of both of them, but since I already had two orange inks on my list, I decided to go with the Vert Olive.


Vert Olive is... an odd colour.  I'm not sure that I would have described it as an olive green.  To me, it looks like a lighter, brighter, and yellower version of Rohrer & Klingner Alt-Goldgrün.  That should be a good thing, because Alt-Goldgrün is one of my favourite inks, but Vert Olive is a bit too light for me.  I really love this shade of green, but it's simply not dark enough to make it easy  to read.  It might look okay in the writing samples here, but photos can be deceptive and I'm not so sure about reading an entire page (or two) of this ink colour.  That said, I am (as always in my ink reviews) using my Lamy F nib, so maybe this colour would work out better in a broader nib.


Vert Olive's shading is terrific.  It seems to me to be a bit... softer (or something like that) than the shading in some other inks I've tried.  It adds some character to my writing without being too obvious.  The flow of the ink is also great and very smooth.  Bleedthough is typical: you're probably going to see some on cheaper papers, but probably not on good papers.  Feathering seems to be minimal even on cheap paper (and of course is not present at all on good paper).  Drying time seems around average, and perhaps a bit faster than some.


Overall, J. Herbin Vert Olive leaves me feeling conflicted.  I love the colour, the shading, and the flow, but I don't think it's an ink that I would want to use regularly for writing.  It should be great for doodling and sketching though, and I think some of J. Herbin's other greens will be in my future (I particularly have my eye on Vert Empire).  Despite my uncertainty about the practicality of the colour, I do like Vert Olive and if you don't mind a colour that's a bit on the light side, I would recommend it.

Related reviews: Peninkcillin, Spiritual Evolution of the Bean, The Well-Appointed Desk, Ink of Me Fondly, Without Ink, Seize the Dave, Good Pens, Pens! Paper! Pencils!, Inkophile.
Posted by Heather at 11:21 AM 3 comments:


I'm not sure that "tan" is the best description of these colours, but whatever you want to call them, these colours are among my favourites, as unexciting as they seem.  Some people may go for the the bright colours and others for the sophisticated blacks and greys, but muted earthy tones like these are what I love.
Posted by Heather at 6:30 AM 1 comment:

I never used to use highlighters.  But lately I've realized how useful they can be for organizing information.  I use several highlighters of different colours to break down my handwritten notes into sub-topics, which helps me to write blog posts and other pieces.  The latest addition to my highlighter collection is this Monami Handy Highlighter.  While it's not the most amazing highlighter, I was excited to try it because Monami is a new brand for me.
﻿

The Monami Handy Highlighter is what I would call a "marker-style" highlighter (no idea whether anyone else uses this terminology or not, but it makes sense to me) - a highlighter with a thick, chunky body that reminds me of a child's marker.  Maybe not what you want if you're trying to convey a sophisticated, mature appearance, but highlighters like these do stand out well in a crowded pen case or cup.


The chisel tip is nice and firm.  It's wide enough to cover most lines of text, yet the point creates a line fine enough for underlining or even writing a quick note.  The colour is bright, yet not the fluorescent shade of some highlighters, making it easier on the eyes.  To me, the colour seems a bit darker than that of some highlighters (despite my photos trying to make it look the opposite way), but it is certainly not dark enough to make it hard to read through. 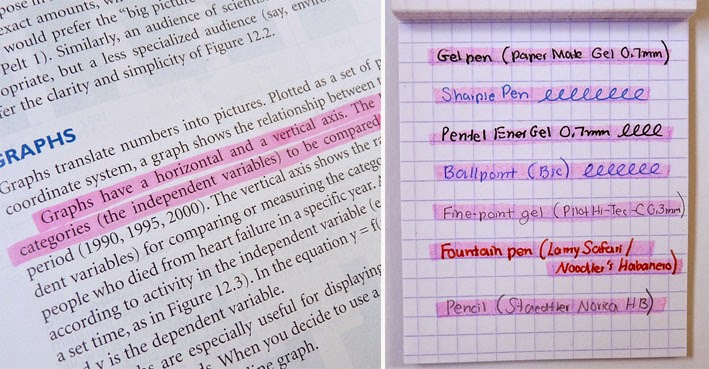 The colour shows up very well on a textbook page, with essentially no show-through to the other side of the page.  It also works well over different pen inks (after letting them dry for approximately 10 minutes).  The 0.7mm gel pen did smear slightly (it almost always does), but I like how the colour of the fountain pen ink still looks good, even through the pink highlighter ink.

Overall, this Monami Handy Highlighter is a fairly decent highlighter, although there's nothing about it (other than the different brand) that makes it stand out to me from any of the other similar highlighters.  I am, however, interested in trying one of Monami's other highlighters, the Essenti Soft, which looks great and which I've read some good reviews of.

Do you use highlighters?  What are your favourite ones?
Posted by Heather at 6:00 AM No comments:

How Do You Clip Your Pens? 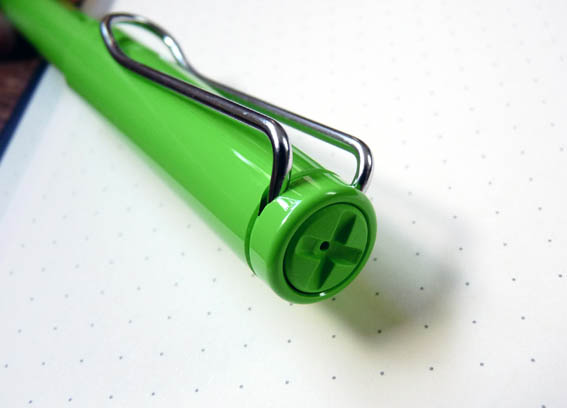 A recent comment on an old post brought to mind a topic I haven't considered before: pen clips.  Do you use pen clips?  If so, what do you clip your pens to?  As the commenter pointed out, the main purpose of pen clips is probably to attach your pen to your shirt pocket.  I suspect that this may be something that men do more than women; I've certainly never done it at any rate.

While I usually don't use the clips on my pens, in the past I have often clipped pens onto my notebook or clipboard.  This came in handy when I was taking notes and recording data in the field during university.  I needed to have my pen/pencil and clipboard (with the data sheet attached to it) accessible so I could easily and quickly write down observations and measurements, but I also needed to have at least one hand free some of the time to handle the measuring equipment.  So I simply clipped my pen onto my clipboard, held my clipboard under my arm, and I was ready.  I would use a similar method when taking notes in my Rite in the Rain notebook in the field.  I used a binder clip to hold my notebook open to the right page, and clipped my pen onto the book so that it was easily accessible when I wanted to jot down a few notes.

I've also found pen clips useful to hold pens in position in a pencil case, and in pen loops attached to ring binders and planners (such as this planner I was using back in 2010).

Although I don't often use pen clips today, I still like to see sturdy-looking clips (preferably metal) on the pens that I review, just in case I need to clip them to something.

Email ThisBlogThis!Share to TwitterShare to FacebookShare to Pinterest
Tags: pen, question for readers

Although the online pen community seems to be focused on fountain pens these days, I still feel thrilled when I come across a cheap, everyday pen or pencil that I haven't tried yet or seen before.  Even if it's just a PaperMate mechanical pencil, like this one, the PaperMate X-Tend.

While PaperMate is definitely not one of my favourite brands, the X-Tend appears to be serviceable.  The main thing it's got going for it is its grip.  The grip is fat and squishy and - best of all - tapered down to the tip, which is ideal for me since I tend to grip my pens and pencils close to the tip.  However, I'm not too fond of the slightly sticky texture of the grip, which also makes this pencil into a magnet for dust and lint.  (Seriously, you could probably use it as a substitute for a lint brush.)  But the grip is comfy, and I probably would have appreciated this pencil during some of my math and physics exams in university.


I like that the eraser on the end is a decent size and not hidden under a cap (which can easily be lost).  I also like that the pencil is available in 0.5mm, not just 0.7mm.  And I like that you can retract the tip of the pencil into the barrel, a feature I only discovered while writing this review (could this possibly be the origin of the name "X-Tend"?).  But the paint on the barrel is of poor quality, with several scratches in it.  Over time, it will probably wear off completely.  Until then, it can match the linty grip and, since I find this pencil rather ugly-looking already, it doesn't really harm the appearance. 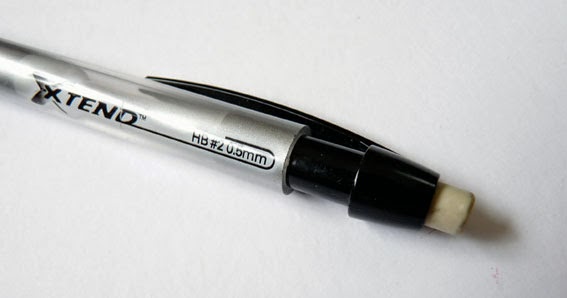 Overall, the PaperMate X-Tend mechanical pencil gets points for its grip (and bonus points for being able to retract the tip), but not for much else.  I'm still happy to have discovered it, though, since discoveries of new (to me) pens and pencils always make me happy.  I'm not sure if PaperMate still makes these pencils (I didn't see them listed on their website), but they seem to be still available in various places online - though they're probably not worth seeking out unless you really fall in love with the grip.