﻿
Tombow MONO drawing pencils have been on my list of "Need to Try" pencils for quite a while, so when Tombow USA contacted me and asked if I wanted to review a set, I was eager to accept, not just because these were pencils I wanted anyway, but also because this would be my first chance to try an entire set of pencils, something I probably wouldn't have bought for myself.  The set comes with 6 pencils (2H, HB, B, 2B, 4B, and 6B) and one Tombow MONO Zero eraser (I'll review the eraser in a later post). 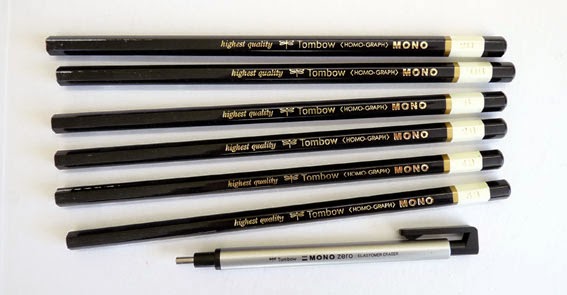 The first impression on receiving the set was that these pencils are beautiful.  They're black with gold lettering and a cream and gold section near the end that labels the grade of the pencil.  They're also hexagonally shaped with no eraser, just a painted cap - both features I prefer.  Unfortunately, a white barcode is also printed on the pencil, which mars its beauty somewhat, but at least it is near the top and so will be the first thing to disappear as I sharpen the pencils. 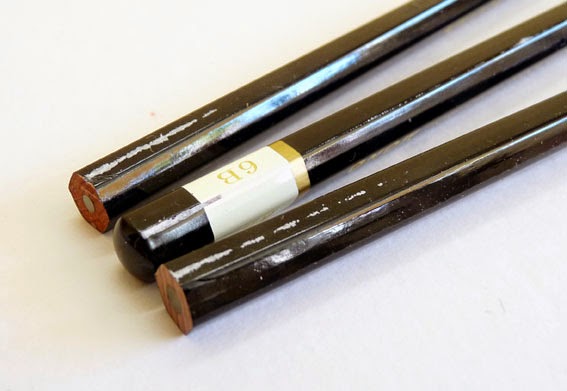 However, as I removed the pencils from the package, I noticed some white marks on some of them (above photo).  When I examined these marks and the package closer, I realized that they were from the paper of the package sticking to the pencil (I could see marks in the package where this had happened) and possibly removing some of the top layer of paint.  This was rather disappointing, even though it doesn't affect how the pencil writes, so I think in the future I'd try to avoid buying these pencils in blister packaging (which I actually try to avoid anyway, since I hate plastic waste). 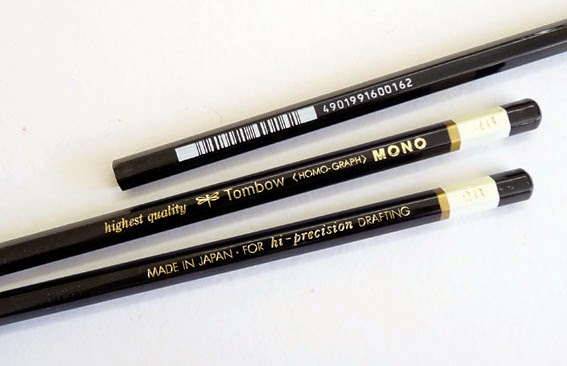 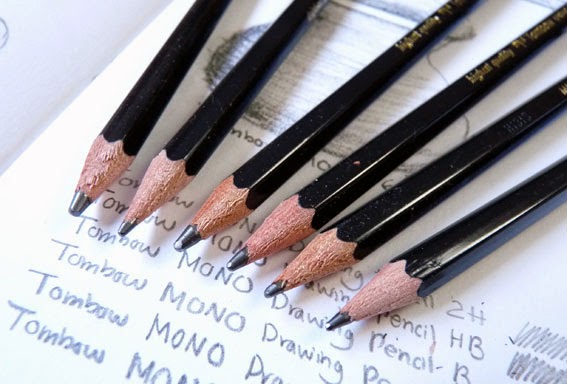 I decided that a set of pencils deserved an entire page spread of sketches, so I did one sketch with each pencil, to hopefully show you a bit of how the different grades compare to each other.  The 2H lead was, of course, noticeably lighter in colour and harder than the others, and while I'm not experienced enough to notice many differences between the HB, B, and 2B leads, the 4B and 6B were definitely darker and much softer.  I especially loved how dark all of the pencils are.  Even the 2H offered more depth of shading than I expected and the HB also seemed relatively dark for that grade.﻿


My favourites were probably the 2H and the B.  As a novice sketcher, I found the 2H the easiest to use, and, as I said above, it shaded better than I expected.  I could see using this to start a drawing and lay out the basic shapes.  I liked the B because it allowed me to get some dark shading, but it was easier to control than the softer pencils.  If I wanted even more depth, then I'd add the 4B to these.  And for writing, I'd probably stick with the 2H or the HB.  Although these are marketed as drawing pencils, I think the harder grades would make great writing pencils since they are nice and dark. 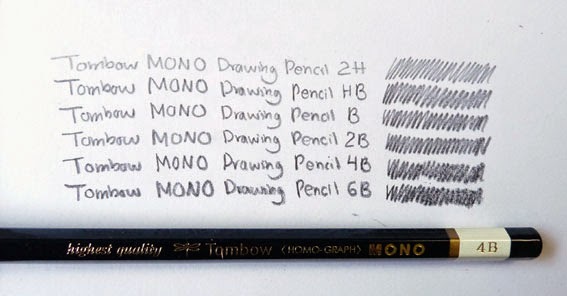 Overall, I really loved all of my sketches with these pencils (actually, I hated them while I was doing them, but when I looked at them later I loved them), but I'm not sure if that reflects the quality of the pencils or just that I'm finally starting to figure out pencil sketching.  I do love my Tombow MONO drawing pencils, however.  They look great and make me feel like a much more serious artist than I really am.  And even more importantly, the harder grades (2H to B) in particular offer the combination of relatively hard yet dark lead that I love and find easiest to use.  I think this set as a whole is a great way to get started and I'd definitely recommend any of these pencils if you're looking for a good quality drawing pencil.  These might just become my new favourite pencils.

Other reviews: That One Pen, Lung Sketching Scrolls.

Note: I received these pencils free of charge from Tombow USA, but that did not affect my review.
Posted by Heather at 6:00 AM