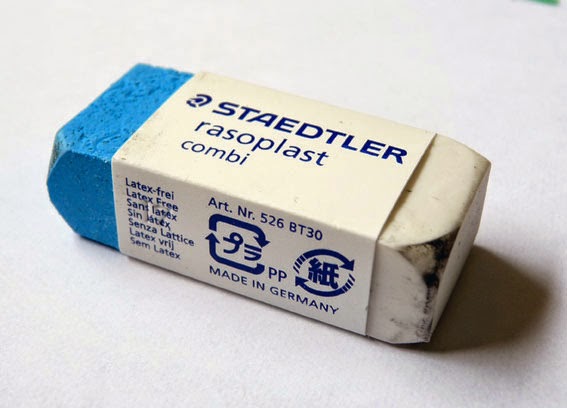 The white end has the familiar soft, flexible feel of most erasers, while the blue end is harder and has a rougher texture.  The eraser is imprinted over its entire length with the Staedtler logo; this is a touch I love on Staedtler erasers.  With the sleeve off, you can see that the white part of the eraser is larger than the blue part. 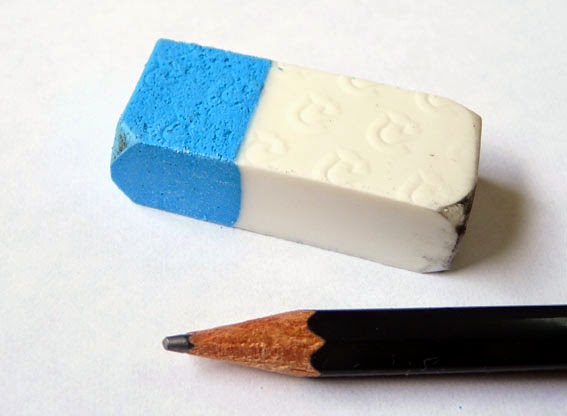 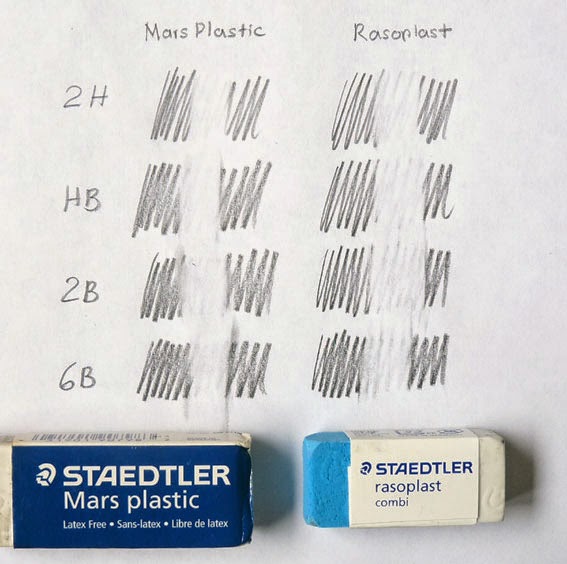 What about the ink eraser end of the Rasoplast Combi?  Here, things get a bit more confusing.  I've owned a few combination-type erasers in the past, and I've always assumed that the blue part was for erasing pen on paper (even though they never seemed to work very well for that).  The Staedtler website even confirms this, with the page for the Rasoplast Combi stating that the "blue part of [the] eraser [is] for ink on paper."  However, a quick test with different types of pens on ordinary copy paper shows that this simply does not work.  The eraser made the gel pen ink look a bit fainter, but otherwise it had absolutely no effect.


Out of curiosity, I turned to Staedtler's page for the Mars Plastic Combi eraser.  Here, we get a different story: the "blue part of [the] eraser [is] for India ink on transparent paper (vellum) and matt drafting film."  This was starting to sound a bit out of my league, but Faber-Castell PITT Artist Pens are supposed to contain India ink, and I do own a few pieces of vellum-type paper that were part of a package of scrapbooking paper I bought many years ago.  So I decided to test the Rasoplast with this combination. 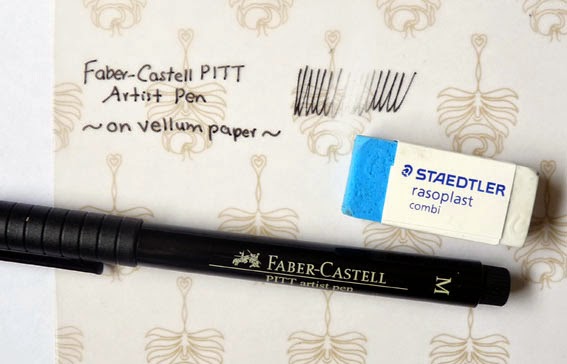 Success!  Sort of.  It didn't erase perfectly, but I'm not sure if that's because it's just not a great eraser, or because my supplies were still not quite the ones it was meant to be used with.  I did notice that erasing the ink took a bit more effort and time than erasing pencil on paper.  Also, the eraser left a slight whitish mark on the vellum paper.

Overall, the Staedtler Rasoplast is an okay eraser, but Staedtler Mars Plastic is a better one.  And do not be fooled by the Combi versions of either eraser (no matter what Staedtler tries to tell you); you will be very disappointed if you try to erase normal pens with them.  I don't think that many people would need to erase India ink on vellum or drafting film, but if you're one of those people, I would love to hear from you about how you use erasers that way, and if the Rasoplast is actually any good for this or not.

Reviews elsewhere: Dave's Mechanical Pencils (pencil eraser only).
Posted by Heather at 6:00 AM