Back in 2012 I started a series of photo posts based on colours: shades of green, shades of orange, etc.  I was inspired by Azizah's old "Shades of Tuesday" posts, which I thought looked like a fun way to show off my collections and direct readers to some of my older reviews; since then, I have seen a few other bloggers sharing similar posts.  However, there are only so many colours to choose from, and eventually my series reached its natural conclusion, although I did revive it (with a slightly different focus and photo format) in 2014.  Since I will not be compiling any more of these posts, I thought that it would be fun to gather all of my "shades of" posts together in one place, so here they are:

Email ThisBlogThis!Share to TwitterShare to FacebookShare to Pinterest
Tags: collection, colour, shades of

The J. Herbin Refillable Rollerball is a rollerball pen that takes fountain pen ink cartridges.  I love the idea of this pen; refillable means less waste and you have your choice of inks to use in it.  I've been curious about the Refillable Rollerball for a long time, but as the reviews I've read have been mixed, I've always been reluctant to buy one.  Luckily, Sunny at Exaclair recently sent me one of these pens so I could test it out myself.

To start with, I love the appearance of the J. Herbin Refillable Rollerball.  It has a minimalist design with a clear body and cap, metal clip, and "J. Herbin" printed in red on the lid.  The pen also came with a barcode sticker with easily peeled off.  I was surprised at how small the pen is (see below comparison with a Lamy Safari fountain pen).  Because of its size, most people will need to keep the cap posted in order to hold the pen comfortably.  And if you have larger hands, this pen may simply be too small for you.

The grip section of the Refillable Rollerball is very basic, being made only of smooth plastic.  There is a thin ridge of plastic (see below photo) toward the nib end of the grip that I did not like at first because I thought it would be uncomfortable to hold (I grip my pens low on the barrel).  I actually found that it made the pen easier to grip.  One thing I do not like is the thin metal ring between the two sections of the pen.  This ring is not attached to anything, and when you unscrew the pen to refill it, it would be easy for this ring to slip off and be lost. 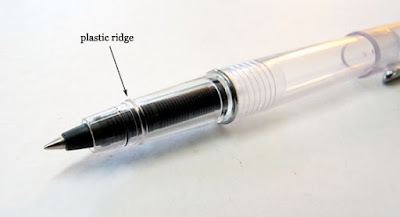 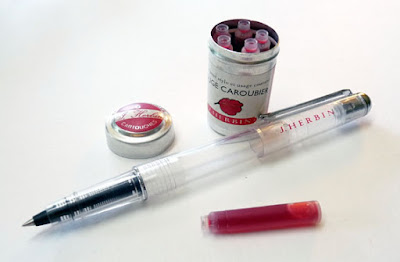 The ink cartridge popped in easily.  Once I started writing, I was immediately pleased with how fine the line was.  I would guess that the Refillable Rollerball writes with a line comparable to that of a 0.5mm gel pen - my ideal line width.  The pen initially wrote very smoothly, but after a few lines, it started skipping (the ink flow briefly slowing or stopping) more and more often.  It soon became so bad that I found it almost impossible to write.

I decided to keep the Refillable Rollerball stored tip downwards overnight in hopes that this would get the ink flowing better the next day.  In the morning, I pulled out the pen once again and started writing with it and testing it on different papers.  Finally, after quite a bit of writing and doodling, I was able to get it to write relatively smoothly on the pages of my Rhodia Webnotebook.  I say "relatively" because the pen was still skipping, just not as badly as the day before.  I also noticed that the pen wrote most easily on more absorbent papers.  For example, flow was excellent (with no skipping) on the recycled paper pages of my Decomposition Book, but since most fountain pen inks feather and bleed on papers like this, this was still far from an ideal writing experience.


Overall, I have mixed feelings about the J. Herbin Refillable Rollerball.  This was a pen I wanted to love, but my experiences with it were disappointing.  I would like to try a few different inks in it; I think it is possible that there exists an ink and paper combination that will work well with it.  But generally it seems to be a finicky pen that requires some patience: Store it tip downwards, allow it some writing time for the ink to start flowing, write more slowly (which reduces skipping), and experiment with different papers to find ones that it likes to write on.  I haven't given up on this pen yet, but I am glad that I did not buy it myself.  If you love the idea and look of the Refillable Rollerball, feel free to give it a try; maybe it will work for you.  But it's not a pen that I'll be recommending.

Note: I received this pen for the purposes of review from Exaclair, but that did not affect my review, and I was not compensated in any other way.
Posted by Heather at 6:00 AM 4 comments: