The Pentel R.S.V.P. is apparently one of the more popular and widely available ballpoint pens out there, so I thought it was time I tried it out and reviewed it myself. 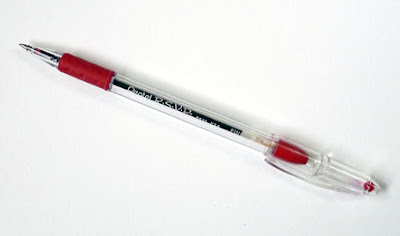 In appearance, the Pentel R.S.V.P. is very basic, as I would expect, but appears to have a bit more polish than other stick ballpoints (maybe it's the silver lettering on the barrel that does it?).  The barrel is clear, allowing easy viewing of the ink level.  The barrel also seems to be slightly wider than usual, and the grip section, which is quite small and short, is (for me) essentially useless.  The wide, round barrel and the useless grip make the R.S.V.P. very uncomfortable for me to write with, even for short periods of time.  I think it would be likely to cause some serious pain in my hand if I wrote with it for a longer time (and no, I'm not going to test that out!). 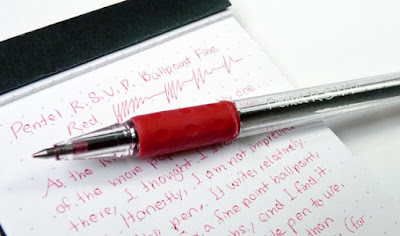 The writing performance is... okay.  The fine point really is fine; a 0.7 mm ballpoint is usually comparable to a 0.5 mm gel pen, my ideal line width.  The R.S.V.P. does seem to write relatively smoothly, for a fine ballpoint pen, although it feels a bit scratchy on some papers.  The ink occasionally blobs, which annoys me, although it's not really that noticeable.  I do not like the red ink; it seems rather faint, which makes me feel that I should be gripping the pen more tightly and pressing harder on the page (neither of which is a good thing to be doing with a pen that I already find uncomfortable to write with).  The colour actually seems very similar to that of the J. Herbin Rouge Caroubier I reviewed a while ago, another red ink I was unimpressed with. 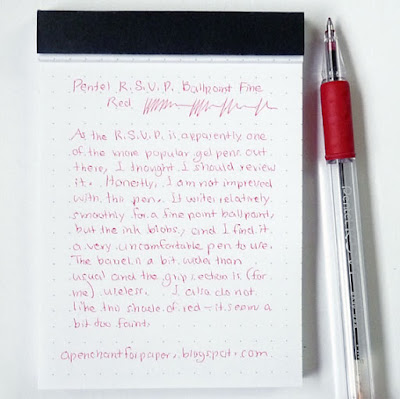 Overall, I did not like the Pentel R.S.V.P.  It feels like a very average ballpoint pen, and when it comes to average ballpoint pens, I like Bic ballpoints much better.  The fact that it is so uncomfortable for me to use means that I will not keep this pen.  Depending on how you grip your pens, you may find this pen more comfortable to use than I did, but I don't think it's worth trying it to find out.

Other reviews: Rhonda Eudaly, No Pen Intended.
Posted by Heather at 3:38 PM