The Pilot G-2 is one of the most popular gel pens available.  I owned a 0.7 mm G-2 once, many years ago, and I remember it being somewhat scratchy and not that nice to write with.  But given their popularity, I thought that it was time to revisit these pens.  I now have a 0.5 mm G-2 in blue and a 0.7 mm G-2 in caramel, both of which I'll be reviewing in this post.  (The pens are also available in 0.38 mm and 1.0 mm, and in a variety of colours.) 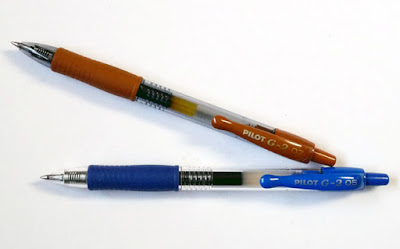 The Pilot G-2 has a very basic design, similar to that of other retractable gel pens such as the Zebra Sarasa and the Bic Velocity Gel. It's rather boring to look at, but it's a functional design that works. One thing that I remember about my old G-2 and that I've seen mentioned in many other reviews is the brownish colour at the end of gel refill. It doesn't bother me as much as it does some other people, but it does seem rather odd, as I've never seen anything like it in any other pen (you can see it most noticeably in the 0.7 mm caramel pen in the photo below). 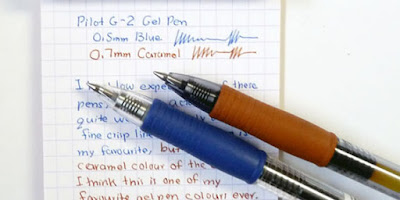 I was pleasantly surprised by how well both of these pens wrote.  I wasn't expecting much from them but both wrote very smoothly, with no scratchiness or skipping.  My favourite was the 0.5 mm, which has a lovely fine, crisp line which suits my small handwriting.  And I love the colour of the caramel pen.  It's a light orange-brown (almost exactly the colour of a caramel candy) that is still dark enough to be easily readable.  I think it's one of the more unique gel pen colours available, and also one of my favourite pen colours ever.


Overall, the Pilot G-2 may not be the most exciting pen out there, but I have no complaints about how it writes and I'm happy with both of the pens I reviewed in this post.  The 0.7 mm is a good basic gel pen (I probably say that about almost all 0.7 mm gel pens I review!) and the 0.5 mm is great if you like a finer line.  I especially like that the G-2 is available in some unconventional colours, such as caramel.  I think that makes it a more interesting pen, and worth giving a try, or maybe a second try.