With my interest in wooden pencils growing, I decided that I needed a new pencil sharpener.  My old sharpener (see photo below) is very basic, and while it is actually a decent sharpener, it quickly becomes very uncomfortable and hard on my hands to use, and it does not include a receptacle to contain the shavings.  My new pencil sharpener is Staedtler's tub sharpener.  It's still a fairly basic sharpener, but with a few features that I like. My Staedtler pencil sharpener has a single 8.2 mm hole, which will accommodate all standard-sized pencils.  Staedtler also makes a double-hole version of this sharpener, with 8.2 mm and 10.2 mm holes.  For now, I'm happy with the single hole as nearly all of my pencils are the standard size.  One thing I like about this sharpener is the lid that covers the sharpener hole when you're not using it.  This means that pencil shavings will not be able to spill out (good if you're carrying this sharpener in your bag).  And when you want to use the sharpener, the lid neatly folds back and snaps into place in a groove on the side of the tub, where it won't be in your way.  The other feature I like is the button that you have to press to open the sharpener.  This reduces the chance of the sharpener accidentally opening and spilling shavings everywhere.  The tub itself seems to be a good size.  I think you could do a lot of sharpening before you needed to empty it. 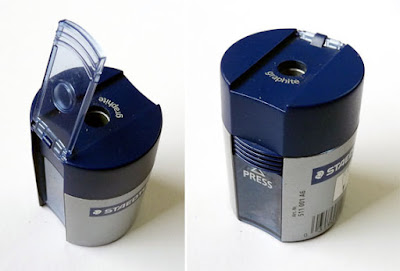 I tested my Staedtler pencil sharpener with several pencils - a Staedtler Norica, Tombow MONO drawing pencil, Dixon Ticonderoga, Rhodia pencil, and Earthzone Recycled Pencil, all in HB.  When I sharpen a pencil I like a point that is sharp, with a moderate sharpening angle; i.e., I don't want the point to be too long (which makes me nervous that I'll either break the lead or stab myself with it) or too short (which I think looks stubby and unattractive).  This pencil sharpener has (according to the Staedtler website) a sharpening angle of 23°, and it sharpened the first four pencils exactly the way I like them.  The fifth pencil, however, proved a bit more problematic.  The Earthzone Recycled Pencil is made of recycled newspaper, not wood (which was why I chose to include it in this test), and the sharpener simply would not sharpen this pencil to as sharp a point as it did the others. 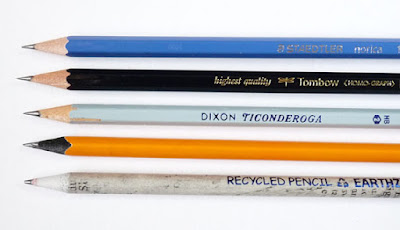 Overall, I'm happy with my Staedtler tub pencil sharpener.  I do want to try more pencil sharpeners, but I think this one was a good choice to start with.  This sharpener may not be the most versatile sharpener for pencils made of non-traditional materials, but it will suit my needs for now.  It's comfortable to use, doesn't leave a mess of shavings on my desk, and will hopefully be only the beginning of my pencil sharpener explorations.
Posted by Heather at 11:40 AM